"Reading a book is like re-writing it for yourself. You bring to a novel, anything you read, all your experience of the world. You bring your history and you read it in your own terms." Angela Carter

"You will be transformed by what you read." Deepak Chopra

"A good book, he had concluded, leaves you wanting to reread the book. A great book comples you to reread your own soul." Richard Flanagan in "The Narrow Road to the Deep North"

"One glance at a book and you hear the voice of another person, perhaps someone dead for 1,000 years. To read is to voyage through time." Carl Sagan

"Books are open doors to other dimensions where everything is possible and nothing is forbidden." Danny Tyran 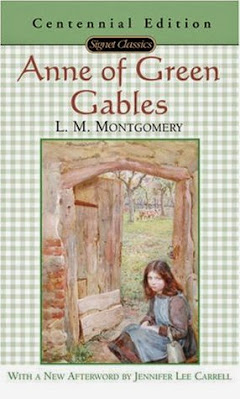 Can you believe that I have never read Anne of Green Gables? Of course, I have heard of it. But it was not a very well known book in Germany when I was little, at least I don't think so, and later I didn't really come across it, either. But I have a couple of Canadian friends who often asked me whether I have read the book or not. And I always had to say "no". So,I thought it was time to read it.

I don't think I have to tell many people about the book. An orphan girl is taken in by a childless couple and she really loves both her new parents as well as the school and the neighbours and everything but still gets into a lot of trouble all the time. The novel is both humorous as well as serious.

"Everyone's favorite redhead, the spunky Anne Shirley, begins her adventures at Green Gables, a farm outside Avonlea, Prince Edward Island. When the freckled girl realizes that the elderly Cuthberts wanted to adopt a boy instead, she begins to try to win them and, consequently, the reader, over."
Posted by Marianne at 10:15 8 comments: