Stroyar, J.N. "The Children's War" and "A Change of Regime" 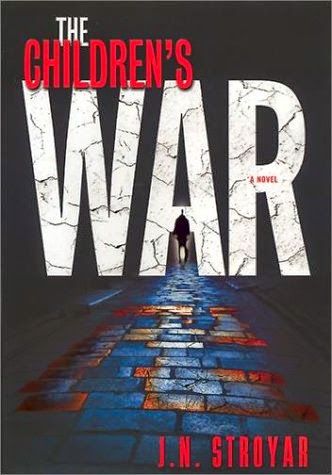 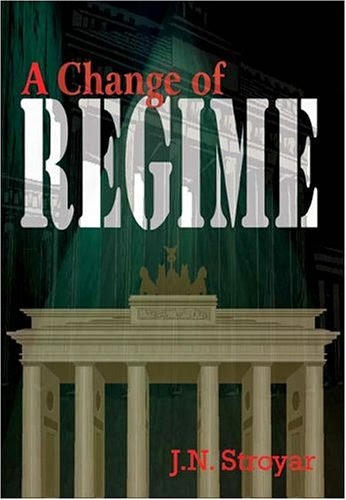 When people say that Germany lost WWII, I always answer, the Germans didn’t lose the war, the Nazis did. Have you ever wondered what would have happened if the Nazis had won? Well, J. N. Stroyar gives us a pretty good idea. Little is known about the author. She is an American scientist who lives in Germany and has done extensive research on dictatorships around the world.

In her two books "A Children’s War" and "A Change of Regime" she draws a picture that couldn’t be more vivid if it was reality. She describes Europe (and the rest of the world) how it would be today if the war had ended differently. In her scenario, the Nazis won and are still reigning most of Europe. In her history, Hitler’s astrologer convinced him that attacking the Soviet Union was a bad idea, and the German nuclear weapons program saw better progress.

I can honestly say that this is one of the best books I have ever read. The story is completely intriguing, the characters are described in the best possible way, they really are characters, every single one of them, even the description of the landscape that usually is just added to the story is so interesting, you want to devour every single word. There are some very powerful scenes where you think you are part of this book, you can hardly put it down.

You won’t forget this story very fast, I’ve read it six years ago and I still think about it daily. The only bad part is that there isn’t a third book, actually!

From the back covers:

"'Peter has had more identities than he can remember and suffered pains and humiliations he longs to forget. But, whether spy or prisoner, slave or propaganda tool, none of his roles has brought the one thing he wants above all: freedom.'

Bad papers. That's how Peter's nightmare began. Living in contemporary Europe under Nazi domination -- more than fifty years after the truce among the North American Union, the Third Reich, and the Soviet Union -- Peter has struggled to make sense of the reign of terror that governs his world. Now, arrested for bearing a false identity, he is pulled full-force into a battle against Nazi oppression. The crusade for freedom that belonged to generations past is now Peter's legacy -- and his future depends not on running away, but on fighting back.

Escaping a Nazi prison camp and joining the Underground Home Army, Peter dedicates himself to breaking down the system that betrayed him. But by facing the evil at the heart of the Nazi political machine, Peter falls deeper into a web of intrigue and adventure that risks everything he holds dear -- in this life and for the sake of future generations.

A disturbingly real vision of what could have been, 'The Children's War' is a page-turning epic thriller with a mesmerizing premise and an unforgettable cast of characters. J.N. Stroyar's searingly authentic, impassioned vision of human triumph over the forces of corruption and cruelty stands as a powerful tribute to the millions who have sacrificed and died in the name of freedom."

A CHANGE OF REGIME

"The struggle against evil continues in 'A Change of Regime', with the characters introduced in J. N. Stroyar's award-winning, critically-acclaimed novel 'The Children's War'. The Third Reich lives on! Having carried out the assassination of his former tormentor Peter Halifax returns to the secret enclave of the anti-Nazi resistance to continue the fight against the regime with his wife Zosia. Emboldened by his success in overcoming his past, Peter returns to Berlin and dices with death to fulfill his dream: providing an escape route for the slave laborers of the Reich. Meanwhile Zosia's brother Ryszard continues his attack from within as he infiltrates, as S. S. Colonel Richard Traugutt, ever deeper into the core of Nazi power, even to within grasp of the ultimate prize: Fhrer of the Third Reich. But there are other forces at work and as Ryszard is forced into betraying Peter, his political enemies plot their own Armageddon. Based on meticulous research and real-life stories, painstaking attention to detail gives the story a brutal reality. The novel addresses the issues of today as the characters wrestle with mad dictators, terrorism, and their own desperate passions. A tale of espionage, of love and betrayal, of courage and collaboration."
13 years after this, the author published a third book from this series:
"Becoming Them" - 2017

See more comments on my ThrowbackThursday post in 2021.
Posted by Marianne at 20:38 8 comments: 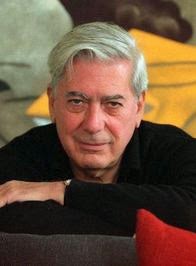 I was going to start this blog with my favourite book ever but since the Nobel Prize for Literature has just been announced, I think I’d like to mention the author. Jorge Mario Pedro Vargas Llosa or Mario Vargas Llosa for short, Peruvian-Spanish writer, received the award “for his cartography of structures of power and his trenchant images of the individual’s resistance, revolt, and defeat.”

Contrary to some of the latest Nobel prize authors (including last year’s German writer Herta Müller), I did know this author and even read one of his books, “The Storyteller” (El Hablador). The main character leaves Western civilization and lives among the Machiguenga Indians in the jungle of Peru. He becomes their storyteller. The writing is unique, the style different, the story mystical and mythical. A very interesting novel. Since this is not the first book mentioned in any of the articles I have seen so far, I will look out for other works of this author.

I read “Aunt Julia and the Scriptwriter” in the meantime, wonderful book.

I contribute to this page: Read the Nobels and you can find all my blogs about Nobel Prize winning authors and their books here.
Posted by Marianne at 23:21 No comments:

Our International Book Club has been running since September 2001.
Here is a list of ALL the books we ever read (in chronological order)

We had a break of a little more than a year from September 2013 until December 2014.
Tanpınar, Ahmet Hamdi "The Time Regulation Institute " (TR: Saatleri Ayarlama Enstitüsü) (Dec 14)
Brown, Daniel James "The Boys in the Boat: Nine Americans and Their Epic Quest for Gold at the 1936 Berlin Olympics" (Jan 15) (non- fiction)
Mann, Thomas "Buddenbrooks: The Decline of a Family" (GE: Buddenbrooks) (Feb 15)
Dugain, Marc "The Officer's Ward" (FR: La chambre des officiers) (Apr 15)
Patchett, Ann "The Patron Saint of Liars" (May 15)

The # and points indicate the place reached in our yearly voting and the exact result.
Posted by Marianne at 12:52 2 comments:

My favourite books ever

Garfield, Simon "On the Map. Why the World Looks the Way it Does" (aka: "On the Map: A Mind-Expanding Exploration of the Way the World Looks")
Griffin, John Howard "Black like me" (white guy disguising as a black in the Southern US during the 50s)
Hanff, Helene "84 Charing Cross Road" and "The Duchess of Bloomsbury Street"
Harari, Yuval Noah "Sapiens", "Homo Deus. A Brief History of Tomorrow"
Harris, Kamala "The Truths We Hold. An American Journey"
Ilibagiza, Immaculée with Erwin, Steve "Left to Tell: Discovering God Amidst the Rwandan Holocaust"
Jason, David "Only Fools and Stories: From Del Boy to Granville, Pop Larkin to Frost"
Kerkeling, Hape "Der Junge muss an die frische Luft. Meine Kindheit und ich" [The boy needs some fresh air]
Khorsandi, Shappi "A Beginner's Guide to Acting English"
Kristof, Nicholas D. & Wudunn, Sheryl "Half the Sky. How to Change the World"
Krug, Nora "Belonging: A German Reckons With History and Home"
Lamb, Christina "The Sewing Circles of Heart: A Personal Voyage Through Afghanistan"
- "The Africa House: The True Story of an English Gentleman and His African Dream"
LeBor, Adam "City of Oranges" (story of Jaffa before and after WWII)
Levy, Andrew "A Brain Wider Than The Sky: A Migraine Diary" (about migraine)
Logue, Mark & Conradi, Peter "The King's Speech: How One Man Saved the British Monarchy"
MacGregor, Neil "Germany. Memories of a Nation" (Deutschland. Erinnerungen einer Nation)
Mandela, Nelson "Long Walk to Freedom" (auto/biography)
Massaquoi, Hans J. "Destined to Witness" (Biography, WWII)
Mortenson, Greg; Bryan, Mike "Stones into Schools: Promoting Peace with Books, Not Bombs, in Afghanistan and Pakistan"
Mortenson, Greg; Relin, David Oliver "Three Cups of Tea: One Man's Mission To Promote Peace...One School At A Time." (American builds schools in Pakistan)
Obama, Michelle "Becoming"
Obama, Barack "A Promised Land" - 2020
Moyle, Franny "Constance: The Tragic and Scandalous Life of Mrs. Oscar Wilde"
O’Farrell, John "An Utterly Impartial History of Britain or 2,000 Years of Upper Calls Idiots in Charge"
Orth, Stephan "Couchsurfing in Iran: Revealing a Hidden World" (GE: Couchsurfing im Iran - Meine Reise hinter verschlossene Türen) - 2015
- "Couchsurfing in Russland. Wie ich fast zum Putin-Versteher wurde" (Couchsurfing in Russia: Friendships and Misadventures Behind Putin’s Curtain)
Pamuk, Orhan "Istanbul - Memories of a City", "My Father's Suitcase", "The Naïve and the Sentimental Novelist" (Nobel Prize 2006)
Perkins, Sue "Spectacles"
Precht, Richard David "Who Am I and If So How Many?: A Journey Through Your Mind"
Russell, Helen "The Year of Living Danishly: My Twelve Months Unearthing the Secrets of the World's Happiest Country"
Seth, Vikram "Two Lives" (biography)
Stewart, Chris "Driving Over Lemons" (An expat in Spain)
Taylor, Helen "Why Women Read Fiction. The Stories of Our Lives"
Tolan, Sandy "The Lemon Tree: An Arab, a Jew, and the Heart of the Middle East" (about a Palestinian house in Israel)
Weir, Alison "Six Tudor Queens. Katherine of Aragon. The True Queen"
- "Six Tudor Queens. Anne Boleyn. A King's Obsession"
- "Six Tudor Queens: Jane Seymour. The Haunted Queen"
- "Six Tudor Queens: Anna of Kleve. Queen of Secrets"
- "The Six Wives of Henry VIII"
Wiesel, Eli "Night" (biography, WWII, Nobel Peace Prize 1986)