Rowlatt, Bee & Witwit, May "Talking About Jane Austen in Baghdad" 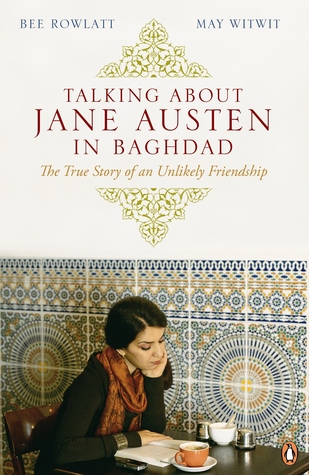 Rowlatt, Bee & Witwit, May "Talking About Jane Austen in Baghdad. The True Story of an Unlikely Friendship" - 2010

Two very different women form a friendship via e-mail, a young British journalist, mother of three little girls and a middle-aged Iraqi woman who is desperately trying to leave her country during the war.

Our book club thought that both title and the cover picture were misleading, we had expected something different. They didn't talk about Jane Austen much and we imagined May, the woman from Iraq, very different than the lady in the cover. Bee, the British woman, was hard to warm up to, we felt a disconnection between her and May to whom she talked like to a child. Everything seemed to be a lot about appearance, Bee wasn't realistic, it seemed a like a game to her. We felt she only got the book deal because of May who is a much better writer. The second half was definitely better when she seemed to realize a little more what this was all about. We were glad that May was able to get out.

On the other hand, you also have to admire Bee's action. Eve though there's really nothing remarkable about her, she used her connections to make a huge difference in someone's life, for their benefit. She could have just been sympathetic and gone on with all her work, charity meetings, etc. and never really given May's situation more thought. Do hungry people get fed from rhetoric?

We talked about asylum seekers, how being in an endless situation can lead to depression.

We asked ourselves whether Bee redeemed herself by writing about her personal problems. We also wondered whether May and Ali are still together as we couldn't see Ali coping with life in Britain. Another subject that came up was the war and why are we there and why not.

We also talked about democracy and whether you can really bring it to a country. I found a few good links with democracy quotes, if you'd like to check them out, there are hundreds on each one of them: The Quote Garden and Better World Quotes.

My favourite: "You cannot bring democracy to a country by attacking it." ~ Akbar Ganji. Although, I also really love the one my son told me when he saw me looking for them: "Fighting for peace is like screaming for silence!" (N.N.)

We discussed this in our book club in September 2011.

From the back cover:
"A London mum and Iraqi teacher should have nothing in common. Yet now, despite their differences, they're the firmest of friends . . . Talking About Jane Austen in Baghdad by Bee Rowlatt and May Witwit is a touching and poignant portrait of an unlikely friendship.

Would you brave gun-toting militias for a cut and blow dry?

May's a tough-talking, hard-smoking, lecturer in English. She's also an Iraqi from a Sunni-Shi'ite background living in Baghdad, dodging bullets before breakfast, bargaining for high heels in bombed-out bazaars and battling through blockades to reach her class of Jane Austen-studying girls. Bee, on the other hand, is a London mum of three, busy fighting off PTA meetings and chicken pox, dealing with dead cats and generally juggling work and family while squabbling with her globe-trotting husband over the socks he leaves lying around the house.

They should have nothing in common.

But when a simple email brings them together, they discover a friendship that overcomes all their differences of culture, religion and age. Talking About Jane Austen in Baghdad is the story of two women who share laughter and tears, and swap their confidences, dreams and fears. And, between the grenades, the gossip, the jokes and the secrets, they also hatch an ingenious plan to help May escape the bombings of Baghdad . . .

Bee Rowlatt is a former show-girl turned BBC World Service journalist. A mother of three and would-be do-gooder, she can find keeping her career going while caring for her three daughters (and husband) pretty tough, even in leafy North London.

May Witwit is an Iraqi expert in Chaucer and sender of emails depicting kittens in fancy dress. She is prepared to face every hazard imaginable to make that all-important hairdresser's appointment."
Posted by Marianne at 17:58