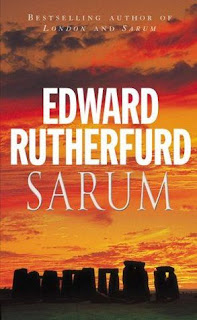 As I already wrote in my review about "London", I’m a huge fan of England and this is not just the story of Salisbury, it is first and foremost the story of England, how it first was settled, what happened next and how did the ordinary people live throughout the centuries.

Edward Rutherfurd kept his style of describing the history of a country or town by their inhabitants, not by the kings who ruled, the dictators or the rich aristocracy but by the "little man". We meet the first settlers, we have an idea how Stonehenge might have built, we learn how Salisbury cathedral (and many other cathedrals like that) was built and what an impact it had on the people. People start raising different kind of sheep who can live better in the climate, they grow different kind of crops and find out how it gives them a better harvest, where they survive best etc. I know it was probably similar in many European countries of the same climate, certainly in mine.

I love how we always meet a couple of people and then see what their descendants are up to, how a family feud can go on for generations but also how times can change and the tides can turn for some, not always positively.

This is a large book, 1,300+ pages and if you want to really enjoy it, don't read it all in one go, you might get overwhelmed. But it's totally worth it and fits in my love for chunky books and my slogan "a book only starts after 500 pages". 😉

This is my seventh novel by Edward Rutherfurd and it won't be the last; "New York" is already on my TBR pile and "China" on my wishlist. I would love for him to write a novel about Germany.

And there's a great quote on page 1112:
"With great minds for company, a man is never lonely." Could we agree more? I think not.

"In a towering story of breathtaking scope, the entire sweep of English civilisation unfolds through the story of one place, Salisbury, and the epic saga of five families.

The Wilsons and the Shockleys, locked in a cycle of revenge and rivalry for more than 400 years; the Masons, who pour their inspired love of stone into the creation of Stonehenge and Salisbury Cathedral; the Porters, descended from a young Roman soldier in exile; and the aristocratic Godefroys, who will fall to the very bottom of the social ladder before their fortunes revive.

As their fates and fortunes intertwine over the course of the centuries, through struggle and adventure, their greater destinies offer a fascinating glimpse into the future."