Books I Read Because Someone Recommended Them to Me
(tell us who recommended them, if you want!) 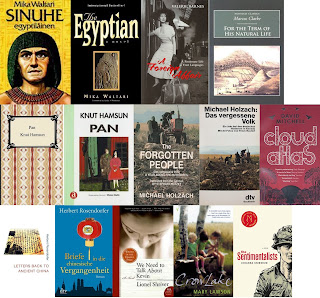 This was a very interesting challenge because it didn't just make me think of some great books I read during the last twenty odd years but about the friends who recommended them to me and who are now all so far away.

Barnes, Valerie "A Foreign Affair. A Passionate Life in Four Languages" - 2004
A recommendation by my Australian friend who worked as an editor and a ghost writer for many years and knew I worked in similar positions as Valerie Barnes. It was such an interesting read for me. Thanks, Marianne.

Clarke, Marcus "For the Term of His Natural Life" - 1870-72
That same friend recommended a classic book about her native Australia to me which was a highly interesting read. Thanks again, Marianne

Hamsun, Knut "Pan" (Norwegian: Pan) - 1894
The favourite author of a Norwegian friend. Quite an unusual book but it brings us back to nature and to ourselves. Thanks, Christina.

Holzach, Michael "The Forgotten People: A Year Among the Hutterites" (German: Das vergessene Volk. Ein Jahr Bei den deutschen Hutterern In Kanada) - 1980
A recommendation by a German friend who also lent this book to me. A German guy who spent a year in an ethnoreligious group in the seventies/eighties. Such a different world. Thank you, Ingrid.

Lawson, Mary "Crow Lake" - 2002
A Canadian friend suggested this book. Life in a village in Canada which is not all that different than life in a village in Germany. I loved this book so much; I have read all of Mary Lawson's books shn wrote ever since. Thanks, Mary. We lost you too soon. RIP.

Mitchell, David "Cloud Atlas" - 2004
A US American friend of mine gave me this book when she left the Netherlands and didn't want to take all her books with her. She thought I might find this interesting. And I did. I would never have bought or borrowed it because I don't think I would have liked the idea of it. But it was an exciting read. Thanks, Julie.

Rosendorfer, Herbert "Letters Back to Ancient China" (German: Briefe in die chinesische Vergangenheit) - 1983
A German friend recommended this. What an interesting idea. Imaging yourself being transported from today a thousand years into the future. This is what happens to this Chinese guy from the year 1000 who finds himself in Munich of the year 2000. He sends letters back home reporting about it. Hilarious. Thanks, Helmut.

Shriver, Lionel "We need to talk about Kevin" - 2003
Another book given to me by my US American friend. This would have been a book I would have read anyway and it was brilliant. Still keeps me shivering. Thanks again, Julie.

Skibsrud, Johanna "The Sentimentalists" - 2010
A present from another Canadian friend. Absolutely loved it. A story about Alzheimer but so much more. Thanks, Marianne.

Waltari, Mika "The Egyptian" (Finnish: Sinuhe Egyptiläinen) - 1945
I doubt I ever would have found this book if it hadn't been by a Finnish friend who said he was such a renowned author. This book doesn't just describe the life of an Egyptian doctor several millennia ago but also is a hidden accusation of the politics in Finland (and the whole world) at the time of its publication. Thanks, Kristiina.
I carried on reading more books by some of these authors. With others, I would have loved to read more but they haven't published any others. What a shame.
Posted by Marianne at 12:02