We don't really celebrate Halloween over here though some kids seem to be going around. Also, I'm not into fantasy, science fiction and/or horror stories, so not many recommendations. Instead of coming up with something that I don't really enjoy or have no relation to, I thought I'd tell you a little about our German autumn customs.

First of all, there is the festivity of St. Martin of Tours. There is a legend that he cut his coat in half and shared it with a beggar. Now, he rides on a horse through the villages and the children follow him with their lanterns, often to the church. The lanterns are mostly self-made, either at home or in playgroup/elementary school. You can buy them everywhere but the own ones are so much more fun. When I was little, we had real candles in them and had to be very careful for them not to burn down. Nowadays, you put an electric one in, safer and still the same amount of fun.

But we also used to go out on other nights. People had decorations up and you would go to the houses in the neighbourhood, sing some songs and get sweets as a "reward". So, you might have little visitors all through autumn, as soon as the nights got longer.

One of my favourite artists, Frank Koebsch, has painted two beautiful pictures of this even, one of them I published in my "Happy September" blog from 2018, the other one is from 2011, both of them depict the custom very well. 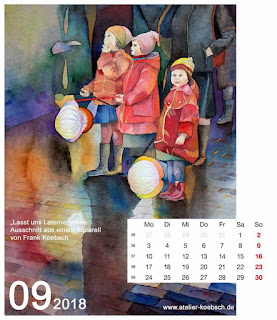 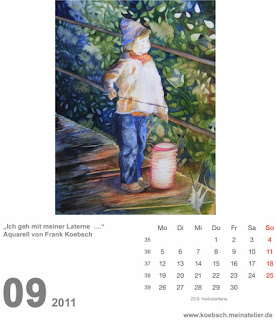 And here are some of the songs we used to sing.
Ich geh mit meiner Laterne
Listen to this song on YouTube