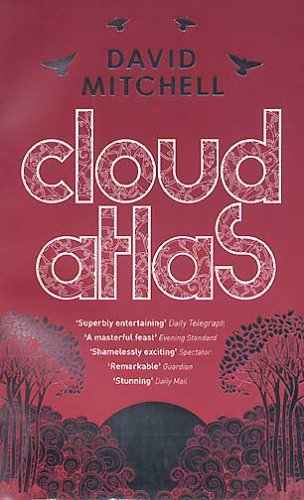 An interesting book. Quite different from anything I've read before. A mixture of a few genres I like and others that I'm not so keen on. Imagine Robert Louis Stevenson, Daniel Defoe, the Brontë sisters, George Eliot, Michael Crighton, Graham Greene, Aldous Huxley, Ray Bradbury, H.G. Wells, George Orwell, Douglas Adams and Margaret Atwood got together to write one continuous story going from any of their times and genres to the next. That's about what the result would be. Really, very interesting and hard to describe.

It's almost like several short stories in one book, only they do belong to each other. The closest type of book I have ever read must be "If on a Winter’s Night a Traveller" (Se una notte d’inverno un viaggiatore) by Italo Calvino although that is still quite a different story.

I think you have to like dystopian literature, otherwise this might not be for you but apart from that, the writing is quite captivating. We start in the past, get to know the protagonists and their stories, move into the future and then go back to see the end of the different stories. In short: quite fascinating.

From the back cover: "Six interlocking lives - one amazing adventure. In a narrative that circles the globe and reaches from the 19th century to a post-apocalyptic future, Cloud Atlas erases the boundaries of time, genre and language to offer an enthralling vision of humanity's will to power, and where it will lead us."
And another one: "A reluctant voyager crossing the Pacific in 1850; a disinherited composer blagging a precarious livelihood in between-the-wars Belgium; a high-minded journalist in Governor Reagan’s California; a vanity publisher fleeing his gangland creditors; a genetically modified 'dinery server' on death-row; and Zachry, a young Pacific Islander witnessing the nightfall of science and civilisation -- the narrators of Cloud Atlas hear each other’s echoes down the corridor of history, and their destinies are changed in ways great and small.
In his captivating third novel, David Mitchell erases the boundaries of language, genre and time to offer a meditation on humanity’ s dangerous will to power, and where it may lead us."
Posted by Marianne at 15:55