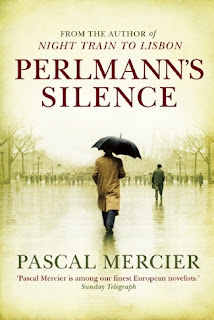 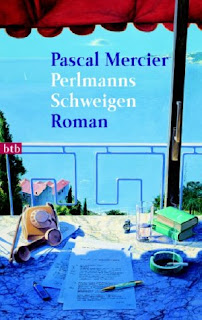 I have read one other book by Pascal Mercier, "Night Train to Lisbon". Ever since, I wanted to read another one of his novels. He has a special way of telling a story, a quiet, almost dreamy way. I think the author is one of the best ones German language writers at the moment.

After having lost his wife, Philipp Perlman hosts a linguistics conference in Italy. While there, he reflects on his life and notices that he has lost all his willpower to go on. We follow him in his endeavour to find a reason for getting out of his predicament.

This book is so hard to describe, the protagonist goes through so many agonies but it doesn't read like a drama. Almost like a philosophical exploration of our thoughts and wishes. An analysis of a life well lived and coming to a slowdown, maybe even a halt.

The story is very intense, we get a glimpse into the mind of a troubled person, how he seems to get from one depth to the next without ever really looking out. You want to persist reading, even if you don't see him going anywhere.

Granted, the book is long and there doesn't seem to be a lot of "action" going on but there is so much  going on in his thoughts. I also really liked the part about linguistics. The protagonist learns Russian and I found it fascinating how he did it. The description of an academic life was also very well done.

A compelling, intriguing read, certainly not an easy one but well worth it. Certainly a must if you love philosophic literature.

In the book, Perlmann also reflects about this one:
Walser, Robert "Jakob von Gunten" - 1909

"A tremendous international success and a huge favorite with booksellers and critics, Pascal Mercier’s Night Train to Lisbon has been one of the best-selling literary European novels in recent years. Now, in Perlmann’s Silence, the follow up to his triumphant North American debut, Pascal Mercier delivers a deft psychological portrait of a man striving to get his life back on track in the wake of his beloved wife’s death.

Philipp Perlmann, prominent linguist and speaker at a gathering of renowned international academics in a picturesque seaside town near Genoa, is struggling to maintain his grip on reality. Derailed by grief and no longer confident of his professional standing, writing his keynote address seems like an insurmountable task, and, as the deadline approaches, Perlmann realizes that he will have nothing to present. Terror-stricken, he decides to plagiarize the work of Leskov, a Russian colleague. But when Leskov’s imminent arrival is announced and threatens to expose Perlmann as a fraud, Perlmann’s mounting desperation leads him to contemplate drastic measures.

An exquisite, captivating portrait of a mind slowly unraveling, Perlmann’s Silence is a brilliant, textured meditation on the complex interplay between language and memory, and the depths of the human psyche."
Posted by Marianne at 13:49