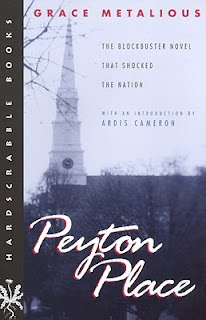 If you are looking for any topic in a book, this one probably has it. It tells us about the life in a small place in New Hampshire, starting in 1937, following its characters up until 1944.

Even though the story takes place a long, long time ago, I believe not that much has changed. I know a lot of Americans who still agree with the kind of double-sided morale shown in this book that was considered controversial, most notorious but also one of the best-selling novels of the 1950s.

The book was made into a movie (which won the Golden Globe and was nominated for 9 Academy Awards) and a television series.

The author was very philosophical and ahead of her time. Some of the quotes from her book could have been current ones:

"If every man … ceased to hate and blame every other man for his own failures and shortcomings, we would see the end of every evil in the world, from war to backbiting."

"Did it ever occur to you … that tolerance can reach a point where it is no more tolerance? When that happens, the noble-sounding attitude which most of us pride ourselves degenerates into weakness and acquiescence."

A great novel that deserves even more respect considering when it was written.

"When it first appeared in 1956, Grace Metalious's Peyton Place unbottened the straitlaced New England of the popular imagination, transformed the publishing industry, and made its young author one of the most talked-about people in America. Metalious's debut novel - which topped the bestseller lists for more than a year and spawned a feature film and long-running television series - reveals the intricate social anatomy of a small New England town. This new paperback edition, which celebrates the seventy-fifth anniversary of Grace Metalious's birth, will reintroduce readers to a landmark of American popular culture. An introduction by Ardis Cameron explores Peyton Place's influential role in American literary and cultural history."