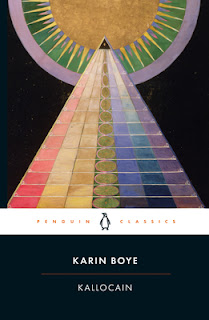 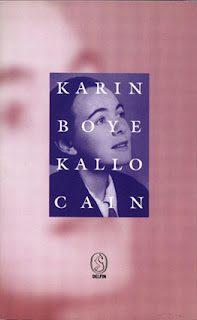 I started reading this book and then had to go back and check when it was written. Yes, it was before "Nineteen Eighty-Four", so George Orwell must have received some of his ideas from Karin Boye.

This was another book our international online book club read. I had never heard of this Swedish author even though she seems to be quite well known for her dystopian literature. Probably not that much outside of Sweden which is a shame. So, I am glad one of our Scandinavian members recommended it.

The book is well-written, the plot runs smoothly and even with an opening paragraph that tells us more or less how the story will end, it is quite gripping to guess how the end will come.

I can never understand highly idealistic people who want to change the world with something they have no clue about. The protagonist of this novel, Leo Kall, is convinced that every person belongs to the state and we are only there to serve the state, are not allowed to have any private wishes or even thoughts. How can that be? How can someone blindly follow a leader like a lamb to the slaughter? If we knew that, we'd have fewer problems in this world.

There is a German song called "Die Gedanken sind frei" (The Thoughts Are Free). I always liked that song because it showed that no matter how much can be controlled, nobody can guess and therefore control my thoughts unless I share them. Not in this story, though. A very thought-provoking idea. What if people would know what we think. I'm pretty sure this world would be a worse place because not everybody likes the truth.
There is an article about the song on Wikipedia with a translation.

This is a great book that shows where our fear can lead us, how we can deal with ideas that want to influence our thinking, how we can try to escape the hatred all around us. I wish more people would read this kind of books. It's also interesting to see, like in "Nineteen-Eight Four" how everyone thinks, their state is the only good one and the others are bad and the others think just the same.

Some comments by other book club members:

And here is a great quote that sounds so true especially at the moment:
"Here I am, then. As it must be. A question of time. If truth be told. Can you hear the truth? Not everyone is true enough to hear the truth, that is the sad thing."

This was our book club read in October 2020.

Written midway between Brave New World and Nineteen Eighty-Four, as the terrible events of the Second World War were unfolding, Kallocain depicts a totalitarian 'World State' which seeks to crush the individual entirely. In this desolate, paranoid landscape of 'police eyes' and 'police ears', the obedient citizen and middle-ranking scientist Leo Kall discovers a drug that will force anyone who takes it to tell the truth. But can private thought really be obliterated? Karin Boye's chilling novel of creeping alienation shows the dangers of acquiescence and the power of resistance, no matter how futile."