Non-Bookish Hobbies
(let’s get to know each other! What do you do that does not involve books or reading?)

I think for most of us that is a tough question. I am sure none of us reads 24 hours a day and, yet, if we have do define ourselves, the first thing we can come up with is that we love reading. At least that's the fact for me.

Cards
Now, what else do I like? First, I've always liked to create something. And for the last twenty years, my family had to endure my love of cardmaking.

Food
I better carry on in alphabetical order. It's not just the food, it's more the companionship. We have lived among Americans for decades and have adapted their way of Thanksgiving for our German friends and family. That's just as important to us than our holidays. I absolutely love baking bread, cakes and cookies, as well. 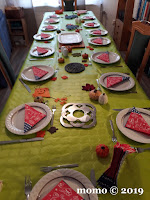 Games
I used to play games with my family when I was little and then we carried on playing with our boys. And we still play with our friends and family. We just love it.

Languages
I love languages. I often get asked how many languages I spek. That's a tough question. It depends on how well you need to speak a language before you can put it in the category "I speak the language". Let's start with the easy ones.

English - I started learning it in 5th grade, that's about half a century ago and I still learn more every day. I lived in England for six years and have worked with/lived among English speaking people more than half of my life. So, I guess, that definitely goes into that category.
French - I started that in 7th grade. I lived in Brussels for a while and went back to visit at least once every year since 1980. I wouldn't call myself perfect but I can easily put it with the languages I speak.
Esperanto - Started this in 1977 and used it a lot in international meetings. It is such an easy language that I can also communicate with it without any difficulties.

Dutch - I'm from Northern Germany where we speak Low German which really is more related to Dutch than High German. (Check here on Wikipedia). Then I lived in the Netherlands for twenty years. Again, one of the languages I would say I speak.

That makes five. Those are also the languages where I read the original book if I get a copy of it. Now it gets toughter. While many who leave school probably know less then I do in those languages, I wouldn't say I speak them. I know enough to be able to read an easy text, get the gist of something. I can even talk to a person one to one (not without ease) but I certainly cannot follow a conversation between two natives.
Spanish - 11th grade but my teacher was sick half the time and that was that. I have been following up with books and online courses (Duolingo, for instance).
Italian - I really wanted to learn this for so long becaues I love the sound of it. It's not too difficult when you speak some other Roman languages already but I never found the right course, the beginner's courses were too easy but I needed to learn the basics. Now, with Duolingo, I'm on the right track.
Latin - 9th grade - not my most glorious subject at school, I didn't like it at all. I've picked it up again but I doubt I will ever be able to really read a long text.
Swedish - my son moved to Sweden for his masters' degree. We meant to visit us, so I started learning it on Duolingo. I've finished the course there but with Corona, we never managed to go. Still, another language that I can read.
Find me here on Duolingo. 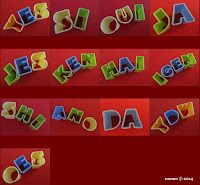 Letters
I've had pen friends from all sorts of countires since I was about thirteen. Still love it. I send more cards nowadays than letters but I communicate with many of my friends via e-mail.

Maps
I just love studying maps and everything that relates to it. Where is Kazakhstan (to quote one of my favourite quizmasters, Richard Osman), what is the capital of Burkina Fazo (Ouagadougou, one of the coolest names there is), what does the flag of Suriname look like (green-white-red-white-green stripes with a yellow star in the middle)??? Fascinating. 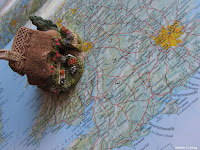 Maths
Next to languages and geography, this was one of my favourite subjects in school. Still love it. 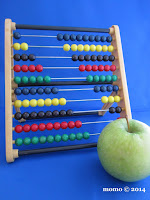 Photography
Granted, my husband is the better photographer but I love it, as well. All the pictures on this page are taken with my camera, the one you can see in this photo.

Sudoku
Killer-Sudoku
I have always loved any kind of puzzles, starting with crosswords and not yet ending with Sudoku (here, I especially love the Killer variety).

Travel
I have always loved traveling and I found a husband who does, as well. While we can't go on any trips at the moment, we enjoy looking at our photographs from past years.