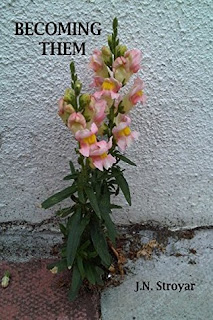 Ten years ago, I read "The Children's War" and "A Change of Regime", one of the best books I ever read and still my favourite. As a German, having to live with the consequences of one of the most terrible wars ever, I have always asked myself what would have happened if the Nazis had won the war. We all would have lost, that's for sure. J.N. Stroyar has brought these thoughts to paper and painted a very vivid picture in her first two books. Then, one day, I learned there was a third one. Wow! I couldn't believe it. I was lucky to find a copy. I have no idea why these books don't get reprinted, I know so many people who would love to read it.

So, I finally found a copy. It had been ten years since I read the first two books. Would I remember enough to jump right back in? Looks like I didn't even have to. The author was so clever to include a ten pages of summary in the front where she retells the story for those who want to review what was in the first books and it might even be enough for those who never read the first ones. I think this should be obligatory for any sequel to any book. Makes reading the follow-up so much easer.

They say on the back cover "the long awaited finale". I didn't even know there was to be a finale. I didn't even know there would be a third book. Mainly, I think, because so little is known about the author. All I know is that she's a US physisict who used to live in German (Frankfurt, I believe) and now lives partly in London and partly in the USA. And that she won the "Sidewise Award" in 2001, an annual award for "Alternate History". She doesn't even have a Wikipedia page. So, I haven't seen anywhere that she was writing a third story.

In this final book of the trilogy, we see how everything gets together in the end, how the long and arduous underground work finally leads to the end of the Nazi party. But not without many, many difficulties first. This third book is just as fascinating, exciting and thrilling as the first two. I hope many people will be able to read it.

I also hope that the author is going to write more books.

Quote from Wikipedia:
"The Bradenton Herald described The Children's War as 'a brutal look at what might have been and a reminder of the price of freedom.'"
So very exact and true.

"The long awaited finale of The Children’s War is presented in Becoming Them. Drawn from genuine historical incidents and people, both from the past and the present, the story examines the psychology of war, torture, and resistance, of guilt and innocence.

Set in a world sixty years after the conquest of Europe by Nazi Germany, the resistance movement continues its struggle for freedom, passing their war on from generation to generation. Peter Halifax, one-time member of the English Underground, has just been released from prison and now works with his assassin wife Zosia Król in Berlin under the direction of her brother, Ryszard, who, as his alter-ego Colonel Richard Traugutt, is second in command of the Third Reich. Together they attempt to collapse the Nazi Party and reform the Reich from within.

The story begins in London where Peter has been sent to liaise with the English Underground as a member of the newly formed Nichtdeutsch Council, but instead he becomes the target of an assassination attempt. It is only one indication of the growing chaos and violence in the Reich as the population becomes disenchanted with the dithering leadership of their new Fuhrer, Josef Frauenfeld.

As a member of the Nichtdeutsch Council, Zosia attempts to organize the various opposition factions into a coherent movement while struggling to raise her family, carefully keeping her three children away from Berlin high society where Magdalena, who is Elspeth’s and Peter’s daughter, might be recognized. She also maintains contact with her base in the Carpathian mountains and undertakes jobs for them that lead her into ever more questionable actions.

Richard Traugutt, as special advisor to the Fuhrer, works to change the laws of the Reich to give more rights and freedoms to its subjects, but he is endlessly stymied by Frauenfeld who has fallen under the sway of Richard’s enemies, the Lederman brothers, who are staunch supporters of the racial categorizations of Reich law. In an attempt to shatter Frauenfeld’s illusions about the rigid class system, Richard maneuvers Peter, who is still classified as subhuman, into the highest tiers of Berlin society, into re-establishing his illicit relationship with Elspeth Vogel, and even into befriending the Fuhrer in the hopes of causing a cultural clash that will force Frauenfeld to re-evaluate his adherence to Nazi philosophy. Traugutt’s plan falls foul of all his directives, and his determination to follow his own personal agenda for reform, ruthlessly manipulating people and events to maximize their effectiveness – whatever the personal cost – results in constant conflict with his allies and a withdrawal of support from the Underground hierarchy.

As their plots unfold and the Resistance begins to tear itself apart, the past comes back to haunt them all, sowing distrust and fear among the conspirators. With each passing month they more and more come to resemble that which they hate. Their loyalties are frayed, their motives are questioned, trusted comrades turn traitor, and their enemies grow in power. Time is running out.

As background to the story, Becoming Them contains a complete summary of both The Children’s War and A Change of Regime."