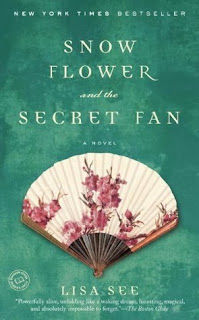 Lila and her friend Snow Flower were both born on "the fifth day of the sixth month of the third year of the Daoguang Emperor's reign" which translated into June 5, 1824 in our calendar. Because of that and some other traits they have in common, they are destined to be "laotong", we would probably say BFFs (best friends forever) today. Yet, same as their husbands, they don't choose the laotong themselves, it's the stars that predict it.

I have already read another book by Lisa See, "Peony in Love", where she mainly writes about the Chinese culture about death and how to take care of your dead ancestors. This one is more about the living, especially the women, the way women in the 19th century in China lived. Not only were they more or less confined to the women's chambers (and the kitchen) of the house, they also had to endure foot binding. This horrible custom gets described very well in this book and while I have read many books about China (my first ones were by Pearl S. Buck when I was a teenager), I don't recall it ever being described so vividly. It's also interesting to see how important it was to have small feet, the smaller, the more marriageable a young girl would be, the better her station in life later on.

It is hard for us today to even understand how parents could do that to their children. And how women were treated in general. How could a mother do that to her daughter? Well, first of all, they all get told all their life that women aren't worth anything and that they raise their daughters for another family. But they want them to have a comfortable or at least half-way decent life. And culture dictated that women had to have small feet. The smaller the feet, the better the marriage. I doubt I could have done that today but it's easy to make that judgment from our point of view. We can decide not to get married or choose our own husbands without big problems. But back then it was essential for survival.

But we also read about Nü Shu, a secret phonetic form of 'women's writing which is something that fascinated me from the moment I heard about it. And the custom that a woman only started living with her husband (and his family) once she had given birth to her first child. Until then, she stayed with her parents and then she would only return to them on certain days of the year when everyone else did the same.

In the book, Lily starts looking back at her life from the view of an 80-year-old woman. She tells us all about her life in her native family, her married family, her friendship and breakup with Snow Flower, her life during the Taiping Rebellion (Wikipedia) her roles as daughter, wife, mother, friend. She doesn't leave anything out.

I also thought it was interesting how important horoscopes were. Lily and Snow Flower were horses which meant they were free-spirited and independent, but also hardworking.

But the language in the book is also beautiful, makes you want to read on and on.

A very interesting novel if you are interested in history, China, or the life or women in general.

From the bck cover:

"In nineteenth-century China, in a remote Hunan county, a girl named Lily, at the tender age of seven, is paired with a laotong, 'old same', in an emotional match that will last a lifetime. The laotong, Snow Flower, introduces herself by sending Lily a silk fan on which she’s painted a poem in nu shu, a unique language that Chinese women created in order to communicate in secret, away from the influence of men.

As the years pass, Lily and Snow Flower send messages on fans, compose stories on handkerchiefs, reaching out of isolation to share their hopes, dreams, and accomplishments. Together, they endure the agony of foot-binding, and reflect upon their arranged marriages, shared loneliness, and the joys and tragedies of motherhood. The two find solace, developing a bond that keeps their spirits alive. But when a misunderstanding arises, their deep friendship suddenly threatens to tear apart."