#6Degrees of Separation: from Beezus and Ramona (Goodreads) to Samuel August from Sevedstorp and Hanna from Hult

This month’s prompt starts with Beezus and Ramona by Beverly Cleary. It was chosen in honour of the author who died last month.

Since this book is about two girls whose names appear in the cover, I have chosen to list books with two names (mainly children), as well. Some of them are better known than others but I hope some people will find something that interests them. 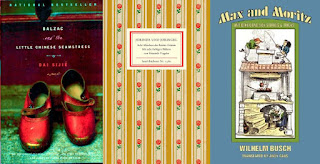 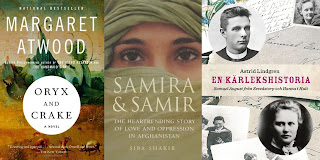 Dai, Sijie "Balzac and the Little Chinese Seamstress" (French: Balzac et la Petite Tailleuse Chinoise) - 2002
Children growing up during the Chinese Cultural Revolution were often thrown into another life, from the city to the countryside and vice-versa.

Grimm, Jacob und Wilhelm "Jorinda and Joringel" [German: Jorinde und Joringel] - 1812
A fairy tale about two young people who fall in love but have to overcome some obstacles, as usual in fairy tales. You can find a link to the translation of this and other fairy tales in my link.

Busch, Wilhelm "Max and Moritz" (German: Max und Moritz) - 1865
Two very well-known boys in Germany, not the nicest of kids with not the best ending but it came to mind right away.

Atwood, Margaret "Oryx and Crake" (MaddAddam # 1) - 2003
The two main characters in this dystopian novel, Oryx and Crake, remind me of children, they are naïve and innocent. Let's hope we never get to this stage.

Shakib, Siba "Samira and Samir" (German: Samira und Samir) - 2004
Another world, another story about a girl growing up in Afghanistan with no chances to ever get out of a vicious circle … unless she changes her identity.

Lindgren, Astrid "Samuel August from Sevedstorp and Hanna from Hult aka A Love Story" (Swedish: En kärlekshistoria: Samuel August från Sevedstorp och Hanna i Hult) - 1975
The famous Swedish author tells us about the life of her parents. Of course, we don't just see them as children but that's where the story begins.