This week's topic is: My Ten Most Recent Reads 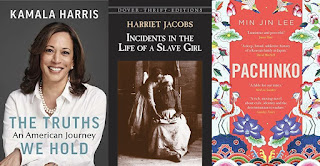 I was surprised how many of them were either about women oppressed or whole countries or parts of them oppressed.

Dickens, Charles "The Old Curiosity Shop" - 1840
Charles Dickens is one of my favourite authors and even though this is not his best book, it certainly is good enough to make it into my top ten. Nobody can tell us about poverty in the 19th century better than Mr. Dickens.

Elliot, Jason "An Unexpected Light. Travels in Afghanistan" - 1999
I have read many books about Afghanistan but next to "The Sewing Circles of Herat" by Christina Lamb, this is certainly one of the best reports about this country. Written by a guy who travelled through it during all kinds of dangerous times and really got to know the people.

Gogol, Nikolai (Никола́й Васи́льевич Го́голь, Nikolay Vasilyevich Gogol) "The Overcoat. Stories from Russia" (Russian: Шинел/Shinyeliь) (German collection: Gogols Mantel. Erzählungen aus Russland) - 1842 et al.
If you like Russian authors, you will certainly find one or probably more among the authors in this collection of short stories.

Hansen, Dörte "Mittagsstunde" [Lunchtime] - 2018
A German book that has not been translated. Yet. Her first book, This House is Mine, has been, so I am hopeful this will be finding its way onto English speaking shelves, as well. A good story about the end of many villages, and this doesn't just happen in Germany.

Harris, Kamala "The Truths We Hold. An American Journey" - 2019
Do I need to explain who Kamala Harris is? I hope not. I have read this book shortly after she was elected vice president of the USA. What a fantastic woman.

Jacobs, Harriet Ann (Linda Brent) "Incidents in the Life of a Slave Girl" - 1861
One of my books on my classics list. I have read lots of books about slavery but this one was actually written by a slave herself. With all her thoughts and fears.

Lee, Min Jin "Pachinko" - 2017
A book about Korean immigrants in Japan. Nobody wants them there and people are awful to them. A great book for anyone, especially those who have to deal with foreigners in their own country.

Obama, Barack "Of Thee I Sing: A Letter to my Daughters" - 2010
I have read some books by Barack Obama whom I greatly admire but not a children's book, yet. This one is wonderful.

See, Lisa "Snow Flower and the Secret Fan" - 2005
After reading "Peony in Love" by the same author, I was looking forward to this one. While "Peony" is about Chinese tradition and their beliefs of the afterlife, "Snow Flower" is about the life of women in 19 century China.