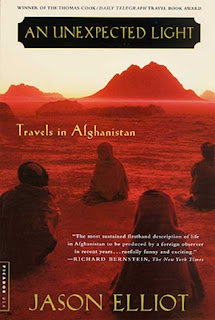 I have read several books about Afghanistan, mostly about the war, some about ordinary people living in the country and/or especially the women. So far, my favourite one has been "The Sewing Circles of Herat: A Personal Voyage Through Afghanistan" by Christina Lamb but this one definitely comes close to pushing it of its podium.

This book was recommended to me by a friend who was taking a world trip with her husband at the same time as the author was in Afghanistan. They spent a while in Peshawar (Pakistan), very close to the Afghan border, and she mentioned that the first part of the book is just how they remember it from that time. Hardly any Westerners got into Afghanistan in those days, so it's a lovely virtual journey to take.

Jason Elliot is extraordinary. Not only did he go to Afghanistan for the first time when he was eighteen and then already explored the troubled country, no, he returned later and travelled everywhere, he even accompanied the Mujaheddin on one of their campaigns, he went into areas where even Afghans wouldn't want to go because it was too dangerous and told him it was worse for foreigners. Quite spectacular.

He has a mind for languages and is as enterprising as any hero in an adventure story. At the same time, he must be a very sympathetic character as he seems to fall in with any kind of person. His interest in other people and their troubles is enchanting and certainly brings many people to tell him about their problems and sorrows. In a war-ridden country, he manages to engage with all sides and report about them. Spectacular.

But even behind the scenes of fights and poverty, he can tell us about the beauty of this country and the kindness of its inhabitants.

A fascinating book. If you're only remotely interested in Afghanistan and its history, this is the book for you.

"Part historical evocation, part travelogue, and part personal quest, An Unexpected Light is the account of Elliot's journey through Afghanistan, a country considered off-limits to travelers for twenty years. Aware of the risks involved, but determined to explore what he could of the Afghan people and culture, Elliot leaves the relative security of Kabul. He travels by foot and on horseback, and hitches rides on trucks that eventually lead him into the snowbound mountains of the North toward Uzbekistan, the former battlefields of the Soviet army's 'hidden war.' Here the Afghan landscape kindles a recollection of the author's life ten years earlier, when he fought with the anti-Soviet mujaheddin resistance during the Soviet occupation of Afghanistan.

Weaving different Afghan times and visits with revealing insights on matters ranging from antipersonnel mines to Sufism, Elliot has created a narrative mosaic of startling prose that captures perfectly the powerful allure of a seldom-glimpsed world."