This week's topic is: Places In Books I’d Love to Live

I lived in four different countries in my life but I've visited many. Most of them, I would happily visit again. Some of them, I didn't want to leave at all, stay forever.

Since Edward Rutherfurd has written some fantastic books about various of those places, I have mainly chosen his books to show the places I'd love to live.

Here are some of the places I loved and wouldn't have minded living (for longer): 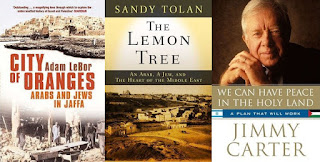 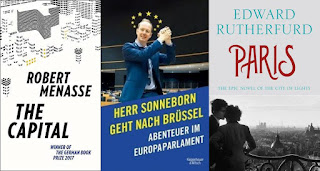 Ireland - Dublin
My favourite place of all, it just feels like home. I've been to Ireland, both the country (or rather both countries) and its fantastic capital and it's so beautiful. And the people are the best in the world.

England
I lived here for six years. The people were wonderful, the country beautiful, everything was great … until they decided to leave the EU. I still love the country but that's why it moved to #2 on my list.

Israel
When visiting Israel in 1986, I absolutely loved everything about the country. If I'd been single, I would have stayed. I have read a lot about the situation in the meantime and even though I don't agree with their politics, I still would love to live there, at least for a while - if it weren't so hot in summer.

Of course, a situation as in "The Lemon Tree" would definitely be preferable and Jimmy Carter has a good plan on how this could be achieved.

LeBor, Adam "City of Oranges"
Tolan, Sandy "The Lemon Tree"
Carter, Jimmy "We Can Have Peace in the Holy Land"

And then there are two cities which I know well and would love to live in.

Brussels
I have lived in Brussels and we have visited it several times every year since we left. Still one of my favourite cities in the world and my son is moving there tomorrow. So, there are more anticipated visits.

Paris
I have a good friend who lives here and I've seen Paris with the eyes of a local. Its flair is unique.

I'm excited to see where the other bloggers want to live.