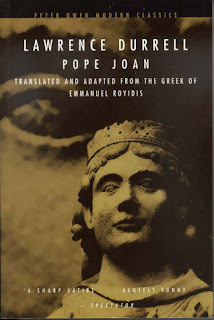 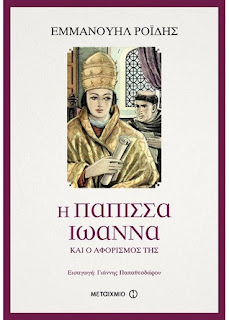 With my book club, I read "Pope Joan" by Donna Woolfolk Cross twenty years ago (my, how time flies!) At some point, I bought this older book about the same subject because it was on a reduced shelf in my bookshop.

Same as the first book I read, this didn't really impress me that much. Granted, there might have been a female pope, I can well believe that but the story itself wasn't too exciting. Also, I couldn't detect the humour that some people loved so much.

However, there is some information about life in the 9th century. That's always nice.

Since this was a Greek book, I read it in German. "Die Päpstin Johanna von Ingelheim"

"'Pope Joan' or 'Papissa Joanna' was originally published in 1886 by the Greek author Emmanuel Royidis. It tells the story of Pope John VIII, the purported ruler of Xendom for a period of two years, five months & four days in the middle of the 9th century. 'Pope Joan' is a comic masterpiece of irreverence towards the medieval Church & the accepted pieties of its revisionist historians. Indeed, insofar as Royidis continued to propagate the legend of Pope Joan, to claim that the work contained only 'facts & events proved beyond discussion', the text itself ingeniously combines history, legend & wit to subvert claims of authority. As Durrell notes in his Preface to his English translation & adaptation, 'the authorities of the Orthodox Church were horrified by what seemed to them to be the impious irony of its author - & no less by the gallery of maggot-ridden church fathers which he described so lovingly.' Not suprisingly, Royidis was excommunicated from the Orthodox Church, his book banned in Greece.

The first three parts of 'Pope Joan' tell of Joanna prior to her arrival in Rome, before she became an historical personage. Set in the 9th century, the narrative captures Europe after the death of Charlemagne, a time when civilization was tenuous & the Church provided one of the few viable social structures. This part is the imagined story of Joanna's life in Germany & then in Greece. After her parents die, Joanna clandestinely enters a monastery where she meets the monk Frumentius & develops a romantic relationship with him. When her gender is surmised, Joanna & Frumentius flee one monastery & then another, eventually ending up in Greece. Joanna soon becomes tired of romance & her intellectual brilliance attracts the attention of Church leaders thruout Greece. She leaves Frumentius & departs alone for Rome, where the legend, some say the history, of Pope Joan begins. She becomes a papal secretary renowned for her intellect &, when Pope Leo IV dies, she ascends to the papacy. Pope Joan becomes pregnant & dies after giving birth during a procession thru Rome.

While the general outline of the narrative may seem only mildly interesting, the translation of Lawrence Durrell, together with the biting, irreverent wit of Royidis, make 'Pope Joan' a work of comic genius. A flavor for this wit & style can be found in a passage describing what ensued after Joan gave birth: 'Great was the consternation when a premature infant was produced from among the voluminous folds of the papal vestments...Some hierarchs who were profoundly devoted to the Holy See sought to save the situation & change horror & disgust to amazement by crying out A miracle! A miracle! They bellowed loudly calling the faithful to kneel & worship. But in vain. Such a miracle was unheard of; & indeed would have been a singular contribution to the annals of Xian thaumaturgy which, while it borrowed many a prodigy from the pagans, had not yet reached the point where it could represent any male saint as pregnant & bringing forth a child.'

While the apologist position has denied the historicity of Pope Joan, there is some suggestion that the legend is factual. As Durrell suggests in his Preface, one telling point is that Platina includes a biography of Pope John VIII in his 'Lives of the Popes'. The Catholic Encyclopedia states: 'Platina's Lives of the Popes is a work of no small merit, for it is the first systematic handbook of papal history. ' Historical disputation aside, however, 'Pope Joan' stands as a brilliant work of comic writing & translation."