Mann, Thomas "A Man and his Dog" 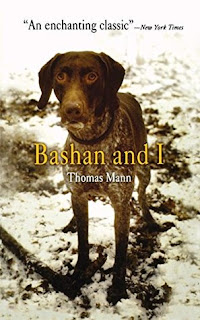 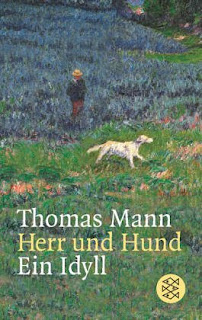 Anyone who knows me is aware of the fact that I love Thomas Mann. And that I'm not a fan of short stories. So, here is a short story by one of my favourite authors. 95 pages. In German! Which means it has probably fewer in English. (I could only find editions with extra writings, so I have no idea how many pages are left of the actual story.

Bashan is called "Bauschan" in the German original. Not a name I have ever come across anywhere. I am not an animal person, have never owned a single one and if I would want one, I'd rather have a cat than a dog, so I probably would not have touched this story if it hadn't been for the author.

The subtitle in German is "an idyll". Is it really that idyllic? Well, at least Thomas Mann manages to describe it like that. Long walks with his dog, beautiful landscape descriptions, a great tale of how a man and his dog grow together, the psychology of his dog. And of the owner. It's a feel good "story". Nothing much happens but you can follow them through their everyday life and imagine you are their on their walks.

The book was written and published in 1918, just when people had to get over WWI, maybe not a bad time to come up with a novella like this.

As for the cover pictures, I prefer the German one, it reminds me of Monet and other impressionists. Well, it's by Henry Moret, a French impressionist painter. I hand't heard of him so could google more of his works and they are beautiful. Lots of seascapes which I always like.

This was our book club read in February 2021.

I can understand these points. My favourite book by Thomas Mann is still is "Buddenbrooks".

I read this in the original German edition.

"Bashan and I is the moving story of Thomas Mann's relationship with his spirited German short-haired pointer. From their first encounter at a local farm, Mann reveals how he slowly grows to love this energetic, loyal, and intelligent animal. Taking daily walks in the nearby parkland, Mann begins to understand and appreciate Bashan as a living being, witnessing his native delight in chasing rabbits, deer, and squirrels along with his careful investigations of stones, fallen branches, and clumps of wet leaves. As their bond deepens, Mann is led to contemplate Bashan's inner life, and marvels at the ease with which his dog trusts him, completely putting his life into his master's hands.

Over time, the two develop a deep mutual understanding, but for Mann, there is always a sense of loss at never being able to enter the private world of his dear friend, and he slowly becomes conscious of the eternal divide between mankind and the rest of nature. Nonetheless, the unique relationship quietly moves to the forefront of Mann's life, and when master and companion are briefly separated, Mann is taken aback by the depth of his loneliness without his dog. It is this deep affection for another living creature that helps the writer to reach a newfound understanding of the nature of love, in all its complexity.

First published in 1919 and translated into English in 1923, Bashan and I was heralded for its simple telling of how a dog became a priceless companion, an animal who brought meaning to the author's life."