When I hear funny titles, I also think funny books. I know the books on this list don't necessarily have to be funny but most of them are.

There's Bill Bryson who invents British place names that are even funnier than the original ones (which are the funniest in the world). Michael Chabon tries to imagine how the state of Israel would have functioned in Alaska. Philip K. Dick lets androids dream, of electric sheep of all things.

Nora Ephron muses about life of women. If you like "When Harry met Sally", you should read Nora Ephron. Jonas Jonasson invented the funniest hundred-year-old.

Alexander McCall Smith's stories about Mma Ramotswe's No. 1 Ladies' Detective Agency are all hilarious but I love the title where he alludes to the "traditionally built" protagonist best. Marisha Pessl's story about a teenager called Blue is not really a funny one but the title of her book is. Calamity Physics, I think we would all love to study that. Saša Stanišić's book about how the soldier repairs the gramophone also isn't funny but the idea that soldiers repair anything differently to a civilian is. That leaves us just with Rebecca Wells who invented the Ya-Ya Sisterhood, a title that's definitely funny. 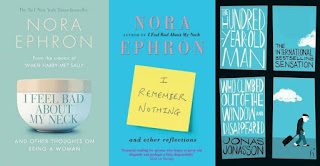 Bryson, Bill "The Road to Little Dribbling: More Notes from a Small Island" - 2015

Ephron, Nora "I Feel Bad About My Neck And Other Thoughts on Being a Woman" - 2006

Ephron, Nora "I Remember Nothing. And other reflections" - 2010