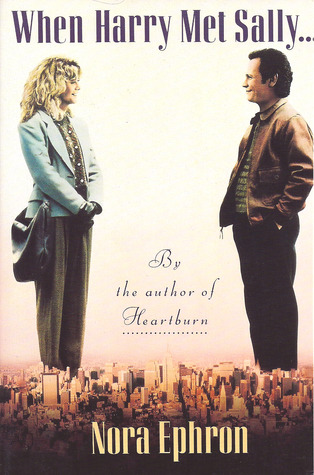 So, when I found the book with the script to the film, I had to put it on my list. It is almost like watching the movie, especially if you have seen it about a hundred times before and more or less know it by heart.

Of course, it also made me want to see the film again. In any case, I am happy to have the script and I can always go back to the scene I love the most, no it's not the one you think about that ends with "I'll have what she's having" but this one:

Waitress: "Hi, what can I get ya?"
Harry: "I'll have a number three."
Sally: "I'd like the chef salad please with the oil and vinegar on the side and the apple pie a la mode."
Waitress: "Chef and apple a la mode."
Sally: "But I'd like the pie heated and I don't want the ice cream on top I want it on the side and I'd like strawberry instead of vanilla if you have it if not then no ice cream just whipped cream but only if it's real if it's out of a can then nothing."
Waitress: "Not even the pie?"
Sally: "No, just the pie, but then not heated."
Waitress: "Ah"

I once saw an interview with Norah Ephron where she talked about being on a plane and changing an order the way she wanted it. The flight attendant asked her "Did you ever watch 'When Harry Met Sally'?" Anyway, it reminds me a little of me, maybe that's the reason I like this story so much.

From the back cover:
"Rob Reiner's enormously funny and moving When Harry Met Sally ... -- a romantic comedy about the difficult, frustrating, awful, funny search for happiness in an American city, where the primary emotion is unrequited love -- is delighting audiences everywhere. Now, the complete screenplay is published. Written by Nora Ephron -- author of screenplays for Silkwood and Heartburn (from her own best-selling novel) -- When Harry Met Sally...is as hilarious on the page as it is on the screen. The book includes an introduction by the author."
Posted by Marianne at 16:03