Piercy, Joseph "The Story of English" 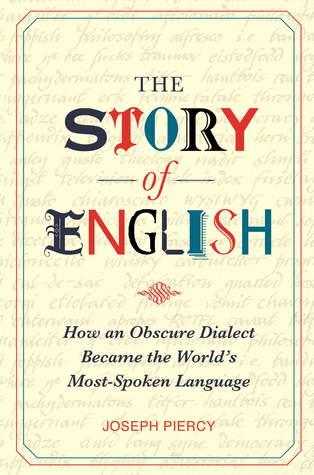 Piercy, Joseph "The Story of English: How an Obscure Dialect became the World's Most-Spoken Language" - 2012

I love languages. I love to know everything about them, so I can't really pass over a book that says "The Story of English: How an Obscure Dialect became the World's Most-Spoken Language". Obscure dialect. That sounds interesting.

I have read a lot about how the English language developed, I know about the Celts and the Romans, the Angles and the Saxons, the Vikings and the Normans and you can tell which words come from which language and why English has such a weird spelling. We know about Chaucer, Shakespeare and many other important writers and what they have done to shape the language.

This book reads like a novel about some people who inhabited a small island, were invaded and then started to invade otters, as well. Totally interesting. There is a lot of history in this book but you can't understand the English language without getting into their history.

It's a quick story about the evolution of the language (less than 200 pages), not as funny as those by Bill Bryson ("Mother Tongue", "Troublesome Words" and "Made in America") but still not a bad read.

"To write or even speak English is not a science but an art. There are no reliable words. Whoever writes English is involved in a struggle that never lets up even for a sentence. He is struggling against vagueness, against obscurity, against the lure of the decorative adjective, against the encroachment of Latin and Greek, and, above all, against the worn-out phrases and dead metaphors with which the language is cluttered up."
George Orwell, English Novelist (1903-59)

From the back cover:
"This is the compelling account of how the obscure dialects spoken by tribes from what are now Denmark, the Low Countries, and northern Germany became the most widely spoken language in the world.

English may have originated with just one country, but it is actually built upon influences from many different languages. From the Anglo-Saxons in the fifth century to the Normans in the eleventh, and on to present-day America, The Story of English shows how our language has evolved during the last two millenia.

Divided chronologically into sections ranging from pre-Roman and Latin influences to today's global language, this fascinating book also explores, among much else, the history of the printing press, the works of Chaucer, the evolution of The American Dictionary of the English Language - better known as Webster's - and the magisterial Oxford English Dictionary, to the use of slang in today's speech and the coming of electronic messaging: language for a postmodern world.

The Story of English is the perfect gift for any lover not just of English, but of the history and development of language."
Posted by Marianne at 18:01