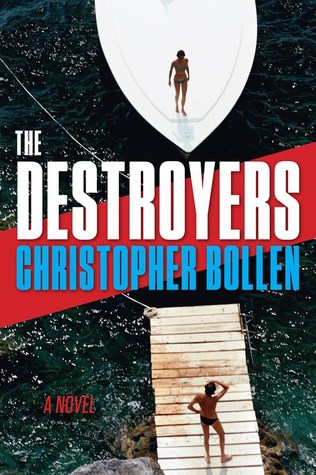 Our latest book club read. I had never heard of this author and I'm not totally surprised. "Mystery" and "thriller" usually doesn't come up in my books.

I only had a couple of days to read this book because it arrived very late from the library. But I think that was a good thing, this is probably not the kind of story you want to spread out.

Not a bad novel, the characters are pretty well drawn, you can imagine they actually exist. The story itself, well, I've never been rich but I can imagine it hits you harder when you don't have any money all of a sudden than when you never had it. People make different decisions in such a situation.

I don't completely agree with the title, the game the "Destroyers" the boys used to play as children, contributed nothing to the story in my opinion.

However, it was an interesting book.

"Arriving on the Greek island of Patmos broke and humiliated, Ian Bledsoe is fleeing the emotional and financial fallout from his father’s death. His childhood friend Charlie - rich, exuberant, and basking in the success of his new venture on the island - could be his last hope.

At first Patmos appears to be a dream -long sun-soaked days on Charlie’s yacht and the reappearance of a girlfriend from Ian’s past - and Charlie readily offers Ian the lifeline he so desperately needs. But, like Charlie himself, this beautiful island conceals a darkness beneath, and it isn’t long before the dream begins to fragment. When Charlie suddenly vanishes, Ian finds himself caught up in deception after deception. As he grapples with the turmoil left in his friend’s wake, he is reminded of an imaginary game called Destroyers they played as children - a game, he now realizes, they may have never stopped playing.

An enthralling odyssey and a gripping, expansive drama, The Destroyers is a vivid and suspenseful story of identity, power and fate, fathers and sons, and self-invention and self-deception, from a writer at the very height of his powers."