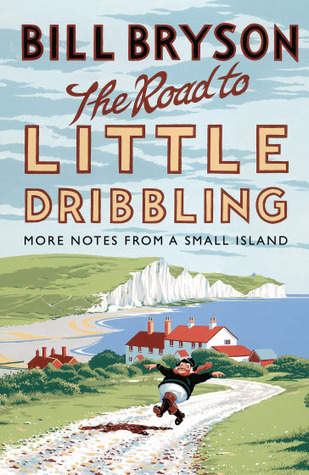 Bryson, Bill "The Road to Little Dribbling: More Notes from a Small Island" - 2015

"Whenever I feel gloomy with the state of the world, ..." so starts one of my favourite Christmas movies (Love Actually) and it carries on with "I think about the arrivals gate at Heathrow Airport". I would end the sentence with "I pick up a book by Bill Bryson and the world is so much better".

As most of my friends know, I love Bill Bryson. My favourite book by him so far was "Notes from a Small Island", a book about the country we both love so much: Great Britain.

Now, he has done it again, he travelled around the island and wrote about the different kind of landscapes, people, funny encounters. It's tough not to laugh when in public, so if you are afraid people will look at you, don't read this when you're out and about. I don't care what people think about me when I read, so I took this book with me wherever I went and even laughed in the waiting room at the dentist.

What I loved about his new book, he grew older, the same way as I did, and the stuff that annoys him now that didn't annoy him twenty years ago, is the same stuff that annoys me now. Yes, we get grumpier and less tolerant of other people's intolerances. And nobody can describe this better than Bill Bryson. The author loves to make fun of his chosen country but he does it in a similar way as the British do it themselves. I have hardly ever met another nation that can laugh about themselves as well as the British. You just have to love that.

Bill Bryson is a grammar nerd, someone who can get upset if people don't use their language correctly, he moans about unnecessary expenses, people who litter any place they get to, stupidity, politics and what it has become, Tripadvisor, all the things that I dislike so much, as well.

But not only that, I love how the author seems to like Kylie Minogue's "talents" just as much as I do. ;) And how he points out that he is an immigrant, that there are highly educated people out there coming from other countries who made Great Britain their home and who hugely contribute to the success of the country and are still considered immigrants. Since I haven't lived in the UK for quite a while, I don't know how much of an issue it is at the moment but I remember someone telling me at the time we lived there that foreigners like us don't count as foreigners because we speak English and integrate well. I have lived in another country for ages, though, as well, and this is exaclty how I feel here.

Anyway, this is not just a funny book, there is so much information about history, geography, science, anything in this book. I have learned that even after living in England for decades, he still loves it as much as I do. It is always a pleasure to read Bill Bryson's books. And there are a few places he described that I haven't seen, yet, and still want to visit. My travel list is growing.

From the back cover: "Twenty years ago, Bill Bryson went on a trip around Britain to celebrate the green and kindly island that had become his adopted country. The hilarious book that resulted, Notes from a Small Island, was taken to the nation’s heart and became the bestselling travel book ever, and was also voted in a BBC poll the book that best represents Britain.
Now, to mark the twentieth anniversary of that modern classic, Bryson makes a brand-new journey round Britain to see what has changed.
Following (but not too closely) a route he dubs the Bryson Line, from Bognor Regis to Cape Wrath, by way of places that many people never get to at all, Bryson sets out to rediscover the wondrously beautiful, magnificently eccentric, endearingly unique country that he thought he knew but doesn’t altogether recognize any more. Yet, despite Britain’s occasional failings and more or less eternal bewilderments, Bill Bryson is still pleased to call our rainy island home. And not just because of the cream teas, a noble history, and an extra day off at Christmas.
Once again, with his matchless homing instinct for the funniest and quirkiest, his unerring eye for the idiotic, the endearing, the ridiculous and the scandalous, Bryson gives us an acute and perceptive insight into all that is best and worst about Britain today."

Since he also mentioned a couple of books in his work, I shall list them here, as well:
Morton, H.V. "In Search of England"
Jennings, Ken "Maphead"
Dunning, David; Kruger, Justin "Unskilled and Unaware of It: How Difficulties in Recognizing One's Own Incompetence Lead to Inflated Self-Assessments"

If you are looking for more of his funny works, have a look at my page about him: Bill Bryson - Funniest Author Ever
Posted by Marianne at 15:43