Jacobs, Harriet Ann "Incidents in the Life of a Slave Girl" 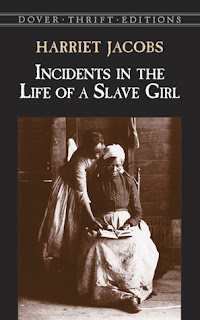 Jacobs, Harriet Ann (Linda Brent) "Incidents in the Life of a Slave Girl" - 1861

I never understood how someone could feel comfortable with "owning" another human being. You would think that we know better by now but this is still going on in this world and we have not changed much. Even if someone doesn't hold slaves, the way we treat others is not much further from that.

In this story, written by a real slave from the 19th century, we learn all the disadvantages of being a slave. The girls who get raped by their masters, the boys (and the girls) who get tortured, the children who are taken from their parents and sold separately, never to see their families again. Awful, terrible, unbelievable. Harriet Jacobs (who first published this book under the name Linda Brent) lived through it all, either herself or her family. As we can see, even if you have a "good" mistress (whatever that means, she owned a slave and didn't even take care that she was set free after her death, don't know what's good about that), this can end from one day to the next.

Since the North didn't really help the slaves, they even sent them back to their "rightful" owners if they caught them, this book was mainly written to open their eyes. Did it help? I doubt it. Maybe some learned from it but many, far too many … haven't learned even today.

A brilliant book written with so much understanding and force. It should be read by everyone at a very early age so that we hopefully will learn from it today.

"The true story of an individual's struggle for self-identity, self-preservation, and freedom, Incidents in the Life of a Slave Girl remains among the few extant slave narratives written by a woman. This autobiographical account chronicles the remarkable odyssey of Harriet Jacobs (1813–1897) whose dauntless spirit and faith carried her from a life of servitude and degradation in North Carolina to liberty and reunion with her children in the North.

Written and published in 1861 after Jacobs' harrowing escape from a vile and predatory master, the memoir delivers a powerful and unflinching portrayal of the abuses and hypocrisy of the master-slave relationship. Jacobs writes frankly of the horrors she suffered as a slave, her eventual escape after several unsuccessful attempts, and her seven years in self-imposed exile, hiding in a coffin-like "garret" attached to her grandmother's porch.

A rare firsthand account of a courageous woman's determination and endurance, this inspirational story also represents a valuable historical record of the continuing battle for freedom and the preservation of family."

See my other reviews about anti-racism here.