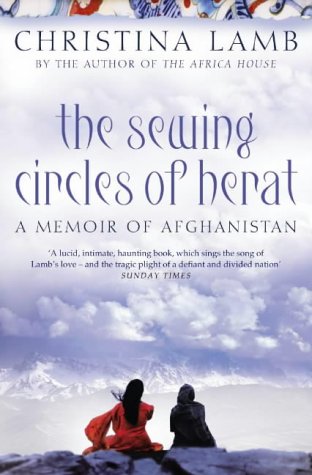 Lamb, Christina "The Sewing Circles of Herat: A Personal Voyage Through Afghanistan" - 2002

I have read quite a few books about Afghanistan over the years since there seem to be a lot available right now. This was by far the best one of them. (All the others were fiction.)

Christina Lamb is a journalist who knows her job. She had been in Afghanistan before 9/11 and then went back straight after when almost no western correspondent was able to get there. She met a lot of people from all sides - politicians, Taliban, normal people, especially women. And she gives a great insight into this tormented country. You almost feel like you're there with her.

Great book about this topic.

From the back cover:
"Ten years ago, Christina Lamb reported on the war the Afghan people were fighting against the Soviet Union. Now, back in Afghanistan, she has written an extraordinary memoir of her love affair with the country and its people.

Long haunted by her experiences in Afghanistan, Lamb returned there after last year's attack on the World Trade Centre to find out what had become of the people and places that had marked her life as a young graduate.This time seeing the land through the eyes of a mother and experienced foreign correspondent, Lamb's journey brings her in touch with the people no one else is writing about: the abandoned victims of almost a quarter century of war.

‘Of all books about Afghanistan, Christina Lamb’s is the most revealing and rewarding…a personal, perceptive and moving account of bravery in the face of staggering difficulties.’ Anthony Sattin, Sunday Times
As an account of how Afghanistan got into its present state, and of the making of the grotesque regime of the Taliban, this book could not possibly be bettered. Brilliant.’ Matthew Leeming, Spectator
Lamb’s book combines a love of Afghanistan with a fearless search for the human stories behind the past twenty-three years of war…Her book is not only a necessary education for the Western reader in the political warring that generated the torture, murder and poverty, but also a stirring lament for the country of ruins that was once better known for its poetry and mosques.’ James Hopkin, The Times"

We discussed this in our book club in May 2005.

I have also read "The Africa House: The True Story of an English Gentleman and His African Dream", just as interesting.
Posted by Marianne at 14:10