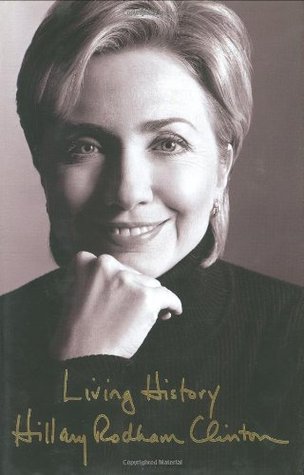 We read this book a long time ago, long before Mrs. Clinton ran for president herself, more or less between her candidacy and the Lewinsky scandal.

Whether you like her politics or not, this book is an account of a woman who is very strong and who managed to get to a certain point through studying and hard work.

We had an interesting discussion, our members were from the United States, Canada, Italy and Germany at that meeting, so we had a view from different perspectives. Not everybody liked it but I put that down to political differences. I am glad I got to read the book and learn more about American politics and the American dream.

We discussed this in our book club in June 2004.

From the book cover:
"A surprisingly engaging and, at points, even compelling book...Clinton provides enough of a peek behind the curtain to keep the pages turning and presents intriguing new details on her role in shaping the policies of her husband's presidency.

Hillary Rodham Clinton is known to hundreds of millions of people around the world. Yet few beyond her close friends and family have ever heard her account of her extraordinary journey. She writes with candor, humor and passion about her upbringing in suburban, middle-class America in the 1950s and her transformation from Goldwater Girl to student activist to controversial First Lady. Living History is her revealing memoir of life through the White House years. It is also her chronicle of living history with Bill Clinton, a thirty-year adventure in love and politics that survives personal betrayal, relentless partisan investigations and constant public scrutiny.

Hillary Rodham Clinton came of age during a time of tumultuous social and political change in America. Like many women of her generation, she grew up with choices and opportunities unknown to her mother or grandmother. She charted her own course through unexplored terrain -- responding to the changing times and her own internal compass -- and became an emblem for some and a lightning rod for others. Wife, mother, lawyer, advocate and international icon, she has lived through America's great political wars, from Watergate to Whitewater.

The only First Lady to play a major role in shaping domestic legislation, Hillary Rodham Clinton traveled tirelessly around the country to champion health care, expand economic and educational opportunity and promote the needs of children and families, and she crisscrossed the globe on behalf of women's rights, human rights and democracy. She redefined the position of First Lady and helped save the presidency from an unconstitutional, politically motivated impeachment. Intimate, powerful and inspiring, Living History captures the essence of one of the most remarkable women of our time and the challenging process by which she came to define herself and find her own voice -- as a woman and as a formidable figure in American politics."
If you would like to read more about Hilary Clinton, I higly recommend "What Happened".
Posted by Marianne at 17:00