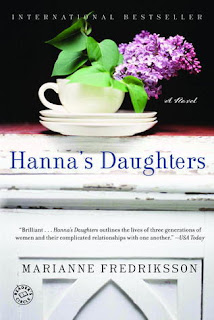 "Hanna. Johanna. Anna. Three women, three generations, one family.
…. this luminous, heartfelt novel spans more than a hundred years in the lives of three remarkable women - a daughter, mother, and grandmother - lives shaped by the epic sweep of history and linked through a century of great love and great loss."

I actually discussed this with two different book clubs, first my English one in England in September 1999 and then with the international book club.

A remarkable story about the life of women and how it changed during the last century. The story is situated in Sweden but it could have happened anywhere in Europe.

Everybody really liked this book. Comments went from "I liked this book very much; I enjoyed the book; it's honest and tells the situations truthfully; the story of Hanna is very impressive; it's good she could write about this." to "There are three different books."

The book was considered a good, easy and amazing read, the three characters are quite believable, they were well described. Marianne Fredriksson has a way to tell the story, has you feel you know the person or situation, you can identify with them. It's a gift to write like the author. There is so much in this book though it is quite short. Some books are much larger and don't contain as much. It's honest, you can only talk to friends like this.

However, there were a lot of people in the story, some had to keep track of who is who, some made a list (always a good idea as soon as you realize there are too many people in a novel to remember).

Most people also enjoyed the descriptions of the landscape. The original title (Anna, Hanna og Johanna) was confusing, since they mention the granddaughter first, then grandmother, then mother. Maybe they changed it because it sounded better. Or because it was Anna who told the story.

This is definitely a woman's book (though men would benefit from reading it), it made us think about sisters, mothers and daughters. It could even be called a feminist book. There were a lot of stories, wife-beating, alcoholism, angst among women. A woman in the novel remarked you can only be a whore or a Madonna. Good to read during a sunny week (rather than in the gloomy winter months).

We are lucky today to have choices. You can also call this a burden of choice, it made us more self-centered. Johanna had all the opportunities, she chooses to be a homemaker. We then had a discussion how difficult that choice is. Being "only" a homemaker is a social downfall. Johanna and even Anna has to defend herself for staying at home.

It was interesting to see the large development from farming to city life. Also, there were a lot of superstitions, magic, people still think like that.

The novel touched two centuries. We all lived through the change of a century and realized that life keeps going on.

We discussed this in our book club in June 2006.

From the back cover:
"Hanna. Johanna. Anna. Three women, three generations, one family.A #1 international bestseller in Europe, this luminous, heartfelt novel spans more than a hundred years in the lives of three remarkable women -- a daughter, mother, and grandmother -- lives shaped by the epic sweep of history and linked through a century of great love and great loss.

As Anna holds vigil at her mother's bedside, she longs for reconciliation -- not just with her mother, Johanna, but with her grandmother, Hanna, a woman she never really knew. Determined to piece together the fragments of her past, Anna sifts through tattered letters, cracked diaries, and old photographs, as the vivid lives of Hanna and Johanna at last begin to unfold.

Through shades of memory and history, longing to join the ancient threads of the family tapestry, Anna begins searching for answers to questions that have haunted her for a lifetime. What was it like for her grandmother, Hanna, more than one hundred years ago, when she married a miller and raised an illegitimate child in a staunch, rural community? What drove Anna's own mother, Johanna, once a fiery revolutionary, to settle down and become a housewife? And why did the ties binding Anna to her mother and grandmother drive all three apart -- only to bring them back together again?

Rich in insight, and resonating with truth and revelation, Hanna's Daughters is an unforgettable story, exploring the volatile ties of mothers and daughters. If you have ever wanted to connect with the past, or rediscover family, this novel will strike a chord in your heart. Marianne Fredriksson has created nothing short of a masterpiece."
Posted by Marianne at 19:37