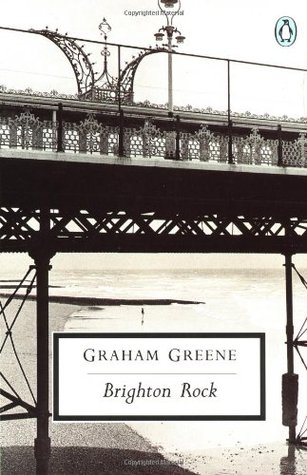 I quite liked this novel, probably not one of my favourites but really not bad. I also liked "The End of the Affair" in a similar way. A journalist gets killed in Brighton, the police declares it natural causes, a woman who just met the guy decides she wants to find the culprits. I liked the way Greene described the characters, how you really love to hate the protagonist, try to understand the women and all the other people in this novel. Being Catholic myself, I found the religious part quite interesting. The main character used the prayers almost like a mantra without even knowing anything about the background except for the fact that he was "doomed". I liked the seaside atmosphere, however, I can imagine it giving a great background for a movie (which I would love to watch now). All in all, I am glad I read this book and would recommend it.

From the back cover:
"Pinkie, a boy gangster in pre-war Brighton, is a Catholic dedicated to evil and damnation. In a dark setting of double crossing and razor slashes, his ambition and hatreds are horribly fulfilled, until Ida determines to convict him for murder."
Posted by Marianne at 16:03