Ishiguro, Kazuo "When We Were Orphans" 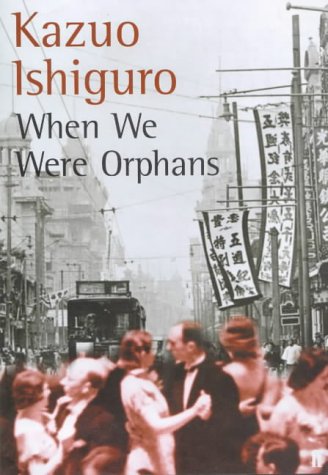 A famous British detective goes on a quest to find why his parents disappeared mysteriously in Shanghai when he was still young.

I read this book with my book club and didn't like it at all. I don't normally like crime stories but this was just a weird trial of writing one, too confused and confusing.  If it hadn't been a book club read, I wouldn't have finished and I vowed never to read an Ishiguro again. Some of my friends mentioned that this was not his best book, I should try "The Remains of the Day" but as long as I have a huge TBR (To Be Read) Pile, I don't think I'll try this any time soon.

From the back cover: "England, 1930s. Christopher Banks has become the country's most celebrated detective, his cases the talk of London society. Yet one unsolved crime has always haunted him: the mysterious disappearance of his parents, in old Shanghai, when he was a small boy. Moving between London and Shanghai of the inter-war years, 'When We Were Orphans' is a remarkable story of memory, intrigue and the need to return."

Kazuo Ishiguro was shortlisted for the Booker Prize in 2000.

We discussed this in our book club in May 2002.

Kazuo Ishiguro "who, in novels of great emotional force, has uncovered the abyss beneath our illusory sense of connection with the world" received the Nobel Prize for Literature in 2017.

I have read "The Remains of the Day" in the meantime. It was slightly better but Kazuo Ishiguro will not become one of my favourite authors.
Posted by Marianne at 14:59