Clarke, Stephen "A Year in the Merde" 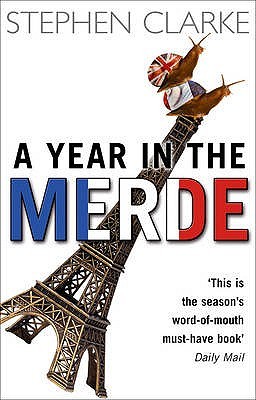 "A Year in the Merde" is a comic novel about an Englishman in France. The author brings about the cultural differences between the British and the French in a funny way.

I stumbled across this book a while ago and found the title quite funny already. Being an expat myself (spent more than a third of my life abroad) I can never overlook these kind of books and therefore had to read it right away.

I was not disappointed. The author goes through all the stereotypes that you come across, the prejudices you have before, the experiences you make that either reinforce these prejudices or - better still - teach you something better.

The book is quite funny. Don't see it with a critical eye towards prejudices, you come across this all the time when you live in another country. These observations can be positive or negative, the author definitely has a positive view about his host nation. The author himself says: "There are lots of French people who are not at all hypocritical, inefficient, treacherous, intolerant, adulterous or incredibly sexy … They just didn't make it into my book." which shows that he doesn't dislike the French people entirely. Well, Paul West (the main character) doesn't, since he tries to stay in Paris even though he has to face a lot of obstacles.

If you hate stereotypes, don't even think about reading this book. But if you like to think about the cultural differences between nations and like to laugh about the problems arising that way, this is a good book for you.

"Paul West, a young Englishman, arrives in Paris to start a new job - and finds out what the French are really like.

They do eat a lot of cheese, some of which smells like pigs' droppings. They don't wash their armpits with garlic soap. Going on strike really is the second national participation sport after pétanque. And, yes, they do use suppositories.

In his first novel, Stephen Clarke gives a laugh-out-loud account of the pleasures and perils of being a Brit in France. Less quaint than A Year in Provence, less chocolatey than Chocolat, A Year in the Merde will tell you how to get served by the grumpiest Parisian waiter; how to make perfect vinaigrette every time; how to make amour - not war; and how not to buy a house in the French countryside."