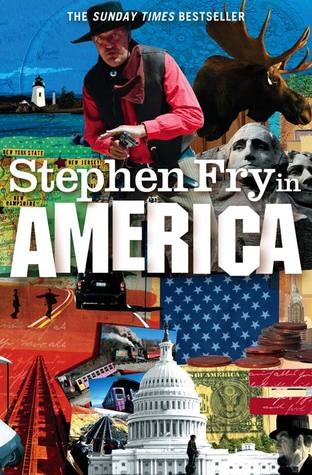 I have a lot of American friends and have read a lot of books about the States or situated in the States or written by American authors but I don't think I've ever read one that has given me so much information about that huge country.

Travelling through half a continent in a London taxi, this could only have been the idea of a Brit. I adore Stephen Fry, he is a very smart and witty person, everything a great comedian should be. Well, he did just as great a job as a reporter about America. He visited all 50 states and had a lot to say about every single one. The way he describes the individual ones makes you want to visit almost everyone immediately. He even found nice words for the ones he wasn't so impressed by.

This was also a television series which is available on DVD.

From the back cover:
"`I could have been American; after all I was nearly born there. So I wanted to find out what is it that makes the United States of America so unique, so diverse, so very American...'

The beauty. The grandeur. The extraordinary contradictions.
But enough about Stephen.

What of America, the thrillingly varied colossus of a country that Stephen went to explore? What is the reality beneath the stereotypes of gun-toting and Bible-bashing?

In his chariot of Englishness - a black London cab - Stephen starts his epic journey on the east coast and zig-zags across America, stopping in every state from Maine to Hawaii. En route he discovers the south Side of Chicago with blues legend Buddy Guy, marches with Zulus in New Orleans' Mardi Gras, and drums with the Sious Nation in South Dakota; joins a Georgia family for Thanksgiving, `picks' with Bluegrass hillbillies, and finds himself in a Tennessee garden full of dead bodies.

Whether in a club for failed gangsters (yes, those are real bullet holes) or celebrating Halloween in Salem (is there anywhere better?), Stephen is welcomed by the people of America - mayors, sheriffs, newspaper editors, park rangers, teachers and hobos. This is the best of the big country, the best of the big brain and the best book about America by Stephen Fry you'll ever read. What more need be said? "
Posted by Marianne at 20:04