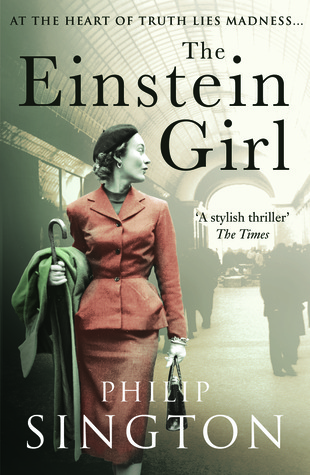 Apparently, an intriguing, first rate historical thriller. Revelations about Albert Einstein's life, correspondence between him and his first wife, a tragedy in their life.

Okay, granted, there seems to be some kind of mystery around the young woman found almost dead in the woods near Berlin and the psychiatrist who tries to find the truth is somewhat inquisitive, his own life seems more interesting than that of the young woman who has lost her memory, can't even remember her name.

Not my type of book, neither dark nor mysterious. The only unanswered question I had at the end: Why did I waste my time reading this?

From the back cover:
"At the heart of truth lies madness...

Two months before Hitler's rise to power, a beautiful young woman is found naked and near death in the woods outside Berlin. When she finally wakes from her coma, she can remember nothing, not even her name. The only clue to her identity is a handbill found nearby, advertising a public lecture by Albert Einstein: 'On the Present State of Quantum Theory'.

Psychiatrist Martin Kirsch takes the case, little suspecting that this will be his last. As he searches for the truth about 'the Einstein Girl', professional fascination turns to reckless love. His investigations lead him to a remote corner of Siberia via a psychiatric hospital in Zurich. There the inheritor of Einstein's genius - his youngest son, Eduard - is writing a book that will destroy his illustrious father and, in the process, change the world."
Posted by Marianne at 16:59