Cullen, Bill "It's a long way from Penny Apples" 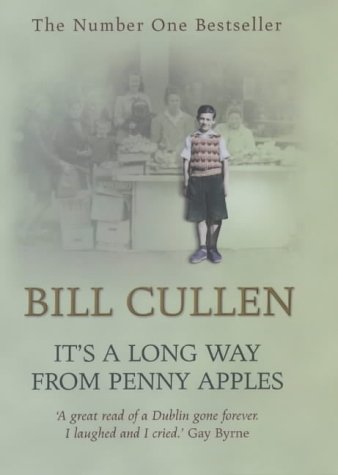 The story of an Irish boy who grew up in poverty and made it to one of the top businessmen in Ireland. I liked the way Bill Cullen told his story as much as the story itself. It's funny and full of love. You got to know the family and everything well. A story that shows how determination and hard work can get you somewhere with a little bit of luck. And, I finally understood the pre-decimal monetary system. I really liked this autobiography.

We discussed this in our book club in September 2004.

From the back cover:
"Cullen's memoir attempts to do for Dublin what Angela's Ashes did for Limerick. Born in the slums in 1942, one of 12 children, Cullen lived a life shaped by hard work, the Catholic Church and family. But unlike McCourt's unrelentingly sad account, Cullen's work trumpets the inner strength and humanity of Irish tenement dwellers. The Cullens may have been poor, but they were resilient. Young Liam, as he was called, worked the market stalls, selling everything from fish to newspapers. En route, he acquired an early and invaluable business education. His parents are a study in true grit, often toiling 15-hour days, while his grandmother instills in Liam a fierce pride in all things Irish, insisting, 'Never forget your roots.' And he never does. Indeed, he parlays a gift for math into a scholarship, managing to attend school and work every day. By the time he's a teen, he's putting in 75 hours a week at a Ford dealership. And it's there, aided by luck and street smarts, that he strikes it rich. The poor boy turns millionaire, moving from Ford franchise owner to CEO of Glencullen Motor Group. Although his early years are far more colorful and compelling than his later adult experiences, Cullen tells this rousing, heartfelt story with flair, honestly recounting the verbal and sexual brutality of some priests, the generosity of his community and his drive to succeed.biography."
Posted by Marianne at 19:42