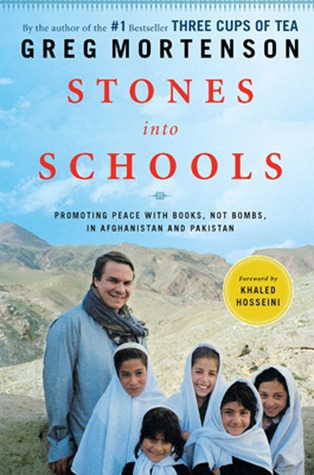 After having read Greg Mortenson's "Three Cups of Tea. : One Man's Mission to Promote Peace . . . One School at a Time" in our book club in 2005, I was delighted that his follow-up was chosen as one of our reads for this year.

Quite a few of us had read "Three Cups of Tea" but you can easily read this just on its own because he gives a good introduction and also revisits stations of his projects throughout the book.

We all loved it, thought this was even better than the first one, maybe it was because he had a different co-writer or he was getting further with his project, whatever, it was a very pleasurable read.

We could not help thinking about him and his wife. They raised lovely kids. He has a great strength of character and patience. If he is a hero, his wife is a saint.

He describes his local co-workers as "The Dirty Dozen", they reminded us more of the United Nations, and being the head of such a diverse group is a great achievement.

Even though someone said she had more questions after than before, and we all agreed to that, we did find the book has a great message. Education is important, especially for women. Being able to read is so essential. If you cannot read, you cannot achieve anything.

We also learned that it is very important that help is coordinated, we have to know what people need. And: Listen more, speak less.

My favourite quote from the book: "When you take the time to actually listen, with humility, to what people have to say, it's amazing what you can learn. Especially if people who are doing the talking also happen to be children."

We discussed this in our book club in April 2011.

From the back cover:
"From the author of the #1 bestseller Three Cups of Tea, the continuing story of this determined humanitarian's efforts to promote peace through education.

In this dramatic first-person narrative, Greg Mortenson picks up where Three Cups of Tea left off in 2003, recounting his relentless, ongoing efforts to establish schools for girls in Afghanistan; his extensive work in Azad Kashmir and Pakistan after a massive earthquake hit the region in 2005; and the unique ways he has built relationships with Islamic clerics, militia commanders, and tribal leaders. He shares for the first time his broader vision to promote peace through education and literacy, as well as touching on military matters, Islam, and women-all woven together with the many rich personal stories of the people who have been involved in this remarkable two-decade humanitarian effort.

Since the 2006 publication of Three Cups of Tea, Mortenson has traveled across the U.S. and the world to share his vision with hundreds of thousands of people. He has met with heads of state, top military officials, and leading politicians who all seek his advice and insight. The continued phenomenal success of Three Cups of Tea proves that there is an eager and committed audience for Mortenson's work and message."
Posted by Marianne at 11:59