Turner, Nancy E. "The Water and the Blood" 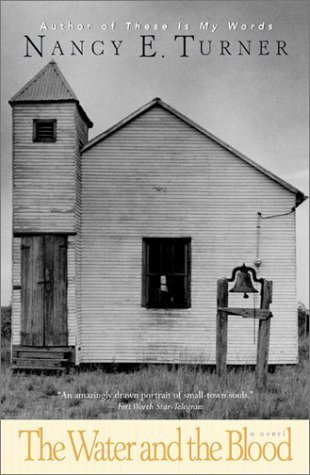 I loved it just as much as the first book of this interesting author. She writes vivid stories with a lot of heart and emotion, I'm looking forward to more of her work.

This book is about a young girl growing up in Texas during World War II, a white society, a religious society, a KKK society. A girl who observes everything well and has to come to terms with racism. A novel about poverty, religion and bigotry, growing up, even murder.

From the back cover:
"Rare is the gift of a writer who is able to conjure up the voices of very different worlds, to give them heat and power and make them sing. Such is the talent of Nancy E. Turner. Her beloved first novel, These Is My Words, opened readers to the challenges of a woman's life in the nineteenth-century Southwest. Now this extraordinary writer shifts her gaze to a very different world -- East Texas in the years of the Second World War -- and to the life of a young woman named Philadelphia Summers, known against her will as Frosty.

From the novel's harrowing opening scene, Frosty's eyes survey the landscape around her -- white rural America -- with the awestruck clarity of an innocent burned by sin. In her mother and sisters she sees fear and small-mindedness; in the eyes of local boys she sees racial hatred and hunger for war. When that war finally comes, it offers her a chance for escape -to California, and the caring arms of Gordon Benally a Native-American soldier. But when she returns to Texas she must face the rejection of a town still gripped by suspicion -- and confront the memory of the crime that has marked her soul since adolescence.

Propelled by the quiet power of one woman's voice, The Water and the Blood is a moving and unforgettable portrait of an America of haunted women and dangerous fools -- an America at once long perished and with us still."

Nancy has continued the account of her grandmother's life with "Sarah's Quilt. A Novel of Sarah Agnes Prine and the Arizona Territories, 1906" and "The Star Garden".
Posted by Marianne at 14:40