Carter, Jimmy "We Can Have Peace In The Holy Land" 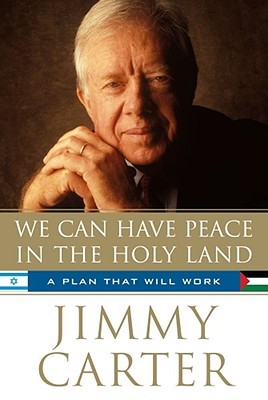 You can tell Jimmy Carter has a lot of experience in this very difficult situation. His ideas are certainly worth considering. He explains the whole background about the problems in the Middle East including all his and other people's efforts to try solving the mess created decades (or even longer) ago.

Anyone should be interested in this topic since it has gone far beyond that little area. And even if it was only for that area, it is far too important to bring peace to an area that has suffered for so long.

An interesting book for anyone who is interested in world politics, especially the Middle East.

From the back cover:
"In this urgent, balanced, and passionate book, Nobel Peace Laureate and former President Jimmy Carter argues that the present moment is a unique time for achieving peace in the Middle East -- and he offers a bold and comprehensive plan to do just that. President Carter has been a student of the biblical Holy Land all his life. For the last three decades, as president of the United States and as founder of The Carter Center, he has studied the complex and interrelated issues of the region's conflicts and has been actively involved in reconciling them. He knows the leaders of all factions in the region who will need to play key roles, and he sees encouraging signs among them.

Carter describes the history of previous peace efforts and why they fell short. He argues persuasively that the road to a peace agreement is now open and that it has broad international and regional support. Most of all, since there will be no progress without courageous and sustained U.S. leadership, he says the time for progress is now. President Barack Obama is committed to a personal effort to exert that leadership, starting early in his administration.

This is President Carter's call for action, and he lays out a practical and doable path to peace."

Jimmy Carter received the Nobel Prize for Peace in 2002 "for his decades of untiring effort to find peaceful solutions to international conflicts, to advance democracy and human rights, and to promote economic and social development."

I contribute to this page: Read the Nobels and you can find all my blogs about Nobel Prize winning authors and their books here.
Posted by Marianne at 12:10