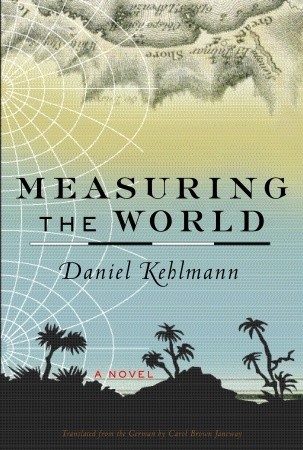 Apparently, this is the most successful German novel since Patrick Suskind's "Perfume" and has knocked J. K. Rowling and Dan Brown off the bestseller lists.

I can very well believe that. The author talks about two brilliant German scientists of the 18th century, the explorer and naturalist Alexander von Humboldt and the great mathematician and physicist Carl Friedrich Gauss. These two guys were the brain of the late 18th century. Humboldt explored the world, well, mainly South America and accounts for a lot of discoveries and findings of that time, Gauss was one of the biggest mathematicians ever, already as a young boy he developed mathematical formulas we still use today, he found out a lot about space, you can say together they "measured the world" as we know it. This is a wonderful story of two extremely successful and interesting lives, and  even if you're not interested in science at all, there is a lot to be learned from that period.

I thoroughly enjoyed reading about it.

From the back cover:
"The young Austrian writer Daniel Kehlmann conjures a brilliant and gently comic novel from the lives of two geniuses of the Enlightenment.

Toward the end of the eighteenth century, two young Germans set out to measure the world. One of them, the Prussian aristocrat Alexander von Humboldt, negotiates savanna and jungle, travels down the Orinoco, tastes poisons, climbs the highest mountain known to man, counts head lice, and explores every hole in the ground. The other, the barely socialized mathematician and astronomer Carl Friedrich Gauss, does not even need to leave his home in Göttingen to prove that space is curved. He can run prime numbers in his head. He cannot imagine a life without women, yet he jumps out of bed on his wedding night to jot down a mathematical formula. Von Humboldt is known to history as the Second Columbus. Gauss is recognized as the greatest mathematical brain since Newton. Terrifyingly famous and more than eccentric in their old age, the two meet in Berlin in 1828. Gauss has hardly climbed out of his carriage before both men are embroiled in the political turmoil sweeping through Germany after Napoleon’s fall.

Already a huge best seller in Germany, Measuring the World marks the debut of a glorious new talent on the international scene."
Posted by Marianne at 20:37