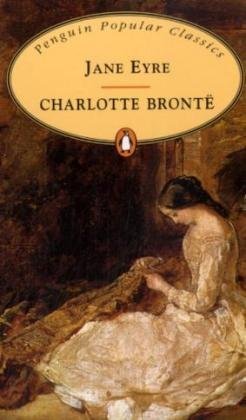 If you are a fan of English classics (like me), "Jane Eyre" is a definitive must.

Charlotte Brontë has created a wonderful, strong young woman. If she had lived today, she certainly would have gone exploring and conquering the world. But she doesn't live now. She is an orphan in Victorian England  who lives with an aunt who doesn't like her. After attending a school, she has to work as a governess for the children of Mr. Rochester.

But I don't want to give away too much, this is where the story starts.

If you like this story and writing, I can also recommend Charlotte's sister Anne's books (e.g. "The Tenant of Wildfell Hall"). Her novels are just as interesting and well written. I did not like Emily Brontë's book "Wuthering Heights", even though that is a very well liked and famous classic, as well.

In the meantime, the novel was chosen and discussed in our book club.

This is what we talked about:
The book was suggested because our member said she reads it every couple of years. I think we were all very grateful that she suggested it because everybody really liked it. Some didn't like the part in school very much but we are aware that this is how it was at the time. The idea of charity for its own sake, because people want to help someone, only started recently.

We found Jane very mature for her age, again, probably the different time made children grow up quicker, especially if they had to fend for themselves. Most of us did not understand how she could go back to her aunt and forgive her. She surely showed a lot of strength there.

We also agreed that Charlotte Brontë was a fabulous feminist, willing to chance the future, writing a book at a time where women were not supposed to write those kind of books.

We were also told about a Turkish film about Jane Eyre, the story set in Turkey. Apparently, it changed the making of Turkish films.

Someone said the book was easy to read, easy to walk into. Again, we all agreed.

From the back cover:
"Orphaned into the household of her Aunt Reed at Gateshead, subject to the cruel regime at Lowood charity school, Jane Eyre nonetheless emerges unbroken in spirit and integrity.She takes up the post of governess at Thornfield, falls in love with Mr. Rochester, and discovers the impediment to their lawful marriage in a story that transcends melodrama to portray a woman's passionate search for a wider and richer life than Victorian society traditionally allowed.
With a heroine full of yearning, the dangerous secrets she encounters, and the choices she finally makes, Charlotte Bronte's innovative and enduring romantic novel continues to engage and provoke readers."