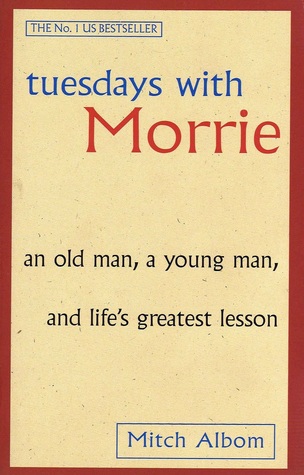 This book is telling the relationship between Mitch Albom, a sports reporter, and his former university professor. The author hears about his professor falling sick and starts visiting him every Tuesday.

It is a very moving and touching book. You learn about life and death and how to deal with it.

For me, it was even more personal when I found out that a friend of mine had been diagnosed with ALS (Amyotrophic Lateral Sclerosis, also known as Lou Gehrig's Disease) a couple of weeks later. Unfortunately, she was too far away by then for me to help her but she had a great circle of friends who accompanied her until the end.

From the back cover:
"Maybe it was a grandparent, or a teacher or a colleague. Someone older, patient and wise, who understood you when you were young and searching, and gave you sound advice to help you make your way through it. For Mitch Albom, that person was Morrie Schwartz, his college professor from nearly twenty years ago.

Maybe, like Mitch, you lost track of this mentor as you made your way, and the insights faded. Wouldn't you like to see that person again, ask the bigger questions that still haunt you?

Mitch Albom had that second chance. He rediscovered Morrie in the last months of the older man's life. Knowing he was dying of ALS - or motor neurone disease - Mitch visited Morrie in his study every Tuesday, just as they used to back in college. Their rekindled relationship turned into one final 'class': lessons in how to live."

We discussed Mitch Albom's next book "The five people you meet in heaven" in our book club in December 2008.
Posted by Marianne at 20:38