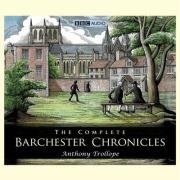 I love these novels because there are so many different themes in the whole series. If you look for a long term commitment and like classical novals, this one's for you.

This novel from the middle of the 19th century describes the life of the people in the Victorian world, a fictive town, Barchester, in a fictive county, Barsetshire, with a cathedral and all its paraphernalia. Trollope describes mainly the life of the ecclesastical population, this time the main character is the warden of an almshouse and his conflicts.

From the back cover:
"This book centres on Mr. Harding, a clergyman of great personal integrity who is nevertheless in possession of an income from a charity far in excess of the sum devoted to the purposes of the foundation. On discovering this, young John Bold turns his reforming zeal to exposing what he regards as an abuse of privilege, despite the fact that he is in love with Mr. Harding's daughter Eleanor."

I read this second and probably most popular novel of the Barchester Chronicles with my former book club in England, so more than a decade ago. In the meantime, I have finished them all, so I put the descriptions about all of them into one post.

The novel centres around the appointment of a new bishop and all the intrigues around that. It continues the story of the warden and his daughters and introduces new characters that will become more important as the story progresses.

You can read this novel on its own but it is so much more fulfilling if you read "The Warden" first.

As I said above, I really love these novels, they are so diverse.

We discussed this in our British Book Club in July 1999.

From the back cover:
"After the death of old Dr Grantly, a bitter struggle begins over who will succeed him as Bishop of Barchester. And when the decision is finally made to appoint the evangelical Dr Proudie, rather than the son of the old bishop, Archdeacon Grantly, resentment and suspicion threaten to cause deep divisions within the diocese. Trollope’s masterly depiction of the plotting and back-stabbing that ensues lies at the heart of one of the most vivid and comic of his Barsetshire novels, peopled by such very different figures as the saintly Warden of Hiram’s Hospital, Septimus Harding, the ineffectual but well-meaning new bishop and his terrifying wife, and the oily chaplain Mr Slope who has designs both on Mr Harding’s daughter and the fascinating would-be femme fatale Signora Vesey-Neroni."

Even though I like all of the Barchester Chronicles, this is my favourite.

Trollope manages to describe the people in his fictive city so well, you think you live among them. The life of Mary Thorne and her uncle is quiet though there are quite a few skeletons in the closet.

From the back cover:
"Doctor Thorne, considered by Trollope to be the best of his works, is a telling examination of the relationship between money and morality.

It recounts the story of the son of a bankrupt landowner, Frank Gresham, who is intent on marrying his beloved Mary Thorne despite her illegitimacy and apparent poverty. Frank's ambitious mother and haughty aunt are set against the match, however, and push him to make a good marriage to a wealthy heiress. Only Mary's loving uncle, Dr Thorne, knows of the fortune she is about to inherit - but believes she should be accepted on her own terms. The third book in the Chronicles of Barsetshire."

As all the other novels of the Barchester Chronicles, this book is very interesting as it describes the life of ordinary and non-ordinary people of the author's time so well. The problems the main character has seem so well known even a century and a half after his story. He is a young clergyman with ambitions who gets caught up in politics. As in all the other novels, Anthony Trollope manages to tell the story with great compassion.

From the back cover:
"The fourth of the Barsetshire Chronicles, Framley Parsonage was published in 1860 to wide acclaim and has always been one of Trollope's most popular novels. In it the values of a Victorian clergyman Mark Robarts, are put to the test. Through a combination of naivety and social ambition, Robarts is compromised and brought to the brink of ruin. Trollope tells his story with great compassion, offsetting the drama with his customary humour. Like all the Barsetshire novels, it is an extraordinarily evocative picture of everyday life in nineteenth-century England.

The only printing of Framley Parsonage that Trollope himself supervised was the serial version in the Cornhill Magazine. The editors of this edition have returned to that text and thus present Trollope's work as he himself would have wished, avoiding hundreds of later corruptions and restoring a number of manuscript readings."

A lot of events happen in this novel that would probably not happen today, at least not in that way. However, as all the other books in this series, Trollope is able to portray some very lively and modern personae, describe life at the end of the 19th century in a very interesting and accessible way and write a fascinating and enthralling story.

From the back cover:
"Engaged to the ambitious and self-serving Adolphus Crosbie, Lily Dale is devastated when he jilts her for the aristocratic Lady Alexandrina. Although crushed by his faithlessness, Lily still believes she is bound to her unworthy former fiancé for life and therefore condemned to remain single after his betrayal. And when a more deserving suitor pays his addresses, she is unable to see past her feelings for Crosbie.

Written when Trollope was at the height of his popularity, The Small House at Allington contains his most admired heroine in Lily Dale - a young woman of independent spirit who nonetheless longs to be loved - and is a moving dramatization of the ways in which personal dilemmas are affected by social pressures."

As the title suggests, this is the last book in the series. It includes a couple of scandals and a lot of other social problems. We see many of our old friends again and meet quite a few new ones. This is the longest of the novels, almost 900 pages, very detailed and descriptive. Together with “Doctor Thorne”, this is one of my favourites.

From the back cover:
"When Reverend Josiah Crawley, the impoverished curate of Hogglestock, is accused of theft it causes a public scandal, sending shockwaves through the world of Barsetshire. The Crawleys desperately try to remain dignified while they are shunned by society, but the scandal threatens to tear them, and the community, apart.

Drawing on his own childhood experience of genteel poverty, Trollope gives a painstakingly realistic depiction of the trials of a family striving to maintain its standards at all costs. With its sensitive portrayal of the proud and self-destructive figure of Crawley, this final volume is the darkest and most complex of all the Barsetshire novels."