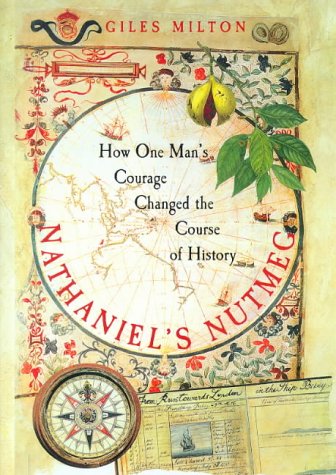 Milton, Giles "Nathaniel's Nutmeg: How One Man's Courage Changed the Course of History" - 1999

"Would you believe that nutmeg formed the basis of one of the most bitter international conflicts of the 17th century, and was also intimately connected to New York City's rise to global preeminence? Strange but true: nutmeg was, in fact, one of the most prized commodities in Renaissance Europe, and its fascinating story is told in Giles Milton's delightful "Nathaniel's Nutmeg'".

This historical book is written like a crime novel. We learned a lot about the history in the Pacific, as well as colonialism, and how one guy and small island can change the whole world forever. Very interestingly written, hugely fascinating story.

How did it happen that we chose this book as our first ever read? We all had brought our favourite books to the first meeting at my house but then decided we'd rather choose a book nobody had read so far. I then brought in some new books that I'd just bought and this sounded so interesting, we only found out while reading it that it is non-fiction. Still, it was a great start.

From the back cover: "In 1616, an English adventurer, Nathaniel Courthope, stepped ashore on a remote island in the East Indies on a secret mission - to persuade the islanders of Run to grant a monopoly to England over their nutmeg, a fabulously valuable spice in Europe. This infuriated the Dutch, who were determined to control the world’s nutmeg supply. For five years Courthope and his band of thirty men were besieged by a force one hundred times greater - and his heroism set in motion the events that led to the founding of the greatest city on earth.

A beautifully told adventure story and a fascinating depiction of exploration in the seventeenth century, NATHANIEL’S NUTMEG sheds a remarkable light on history."

We discussed this in our book club in September 2001.
Posted by Marianne at 16:46