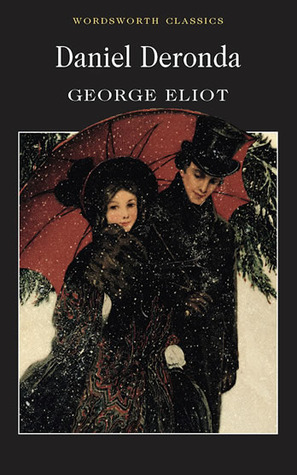 I like the style of the 19th century. I especially like George Eliot's style. She describes the characters extremely well, the problems between the different people are very interesting and everyone seems so alive. There are people whom you will like and others whom you will dislike. The novel gives a lot of information about life at the time, a lot of history, the problem the Jews had all through the centuries. A very interesting book, a lot to read, about 750 pages.

George Eliot said herself that she expected a stronger resistance to her book because of the Jewish element. She wanted to depict the Jews with sympathy and understanding and felt that her readers would dislike this. Throughout the whole book I was amazed how much George Eliot knew about the Jews and the problems they were facing, she almost predicted WWII.

We discussed this in our book club in June 2003.
We also read "Middlemarch" by the same author.

From the back cover:
"George Eliot's final novel and her most ambitious work, Daniel Deronda contrasts the moral laxity of the British aristocracy with the dedicated fervor of Jewish nationalists. Crushed by a loveless marriage to the cruel and arrogant Grandcourt, Gwendolen Harleth seeks salvation in the deeply spiritual and altruistic Daniel Deronda. But Deronda, profoundly affected by the discovery of his Jewish ancestry, is ultimately too committed to his own cultural awakening to save Gwendolen from despair."
Posted by Marianne at 21:15