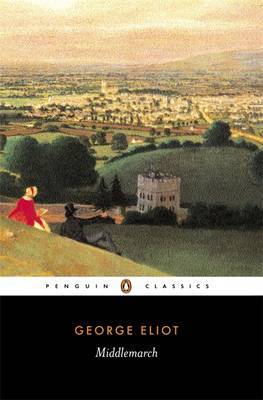 "One of the classic novels of English literature and was admired by Virginia Woolf as one of the few English novels written for grown-up people. A critical introduction, and historical documents, pertaining to medical reform, religious freedom, and the advent of the railroads."

Next to Jane Austen, George Eliot alias Marian Evans is one of my favourite classic British authors. I love classics. English is not my mother tongue but I just could read English classics all the time. I've been reading classics with my various book clubs, one of them in England. And I was usually the one finding it easy whereas my British friends thought it hard. Someone thought it might be that the sentences are so long and it's not like that any more in contemporary English whereas German is full of them.

I think "Middlemarch" is more difficult than, let's say, a Jane Austen. There are more people, for a start, and more people are important to the whole book. But it's also the language. So, while I really loved "Middlemarch" and would recommend reading it, I wouldn't consider George Eliot to be the easiest of writers.

Maybe that's why I love her novels so much, and "Middlemarch" is probably my favourite. Dorothea Brooke, the main character, has been wonderfully described. There is so much she has to deal with.

She could have been a great woman in our time (as the author) with the possibilities we have today but had to fight all her life to be heard. Almost every subject relevant for the time is touched, medical reform, industrialisation, religious thinking, women's rights, a great description of the change of society from the old times to our modern world. There is everything in this book, good and evil, guilt, affections, love, loneliness, hope, happiness, envy, doubt, you name it … A great read!

I thought Dorothea was the best character, not just because she also happened to be the main one. She was so ahead of her time and so strong. And she knew what she wanted. I really admired her and felt sorry for her at the same time. Most of the choices in her life were well tought of, she knew what she was doing, yet, nothing turned out the way she expected it, mainly because the time was not ready for such an incredible woman like Dorothea. Apparently, there's a lot of Marian Evans in Dorothea Brooke.

All in all, a wonderful book, a must for anyone who loves classic novels. Most of our book club members agreed with me, just some found a little too difficult.

The BBC made this into a nice mini-series in 1994.

We discussed this in our book club in June 2007.

From the back cover:
"'People are almost always better than their neighbours think they are'.
George Eliot's most ambitious novel is a masterly evocation of diverse lives and changing fortunes in a provincial community. Peopling its landscape are Dorothea Brooke, a young idealist whose search for intellectual fulfilment leads her into a disastrous marriage to the pedantic scholar Casaubon; the charming but tactless Dr Lydgate, whose pioneering medical methods, combined with an imprudent marriage to the spendthrift beauty Rosamond, threaten to undermine his career; and the religious hypocrite Bulstode, hiding scandalous crimes from his past. As their stories entwine, George Eliot creates a richly nuanced and moving drama, hailed by Virginia Woolf as 'one of the few English novels written for grown-up people'.
"
We also read "Daniel Deronda" by the same author.
Posted by Marianne at 21:14