Steinbeck, John "Of Mice and Men" 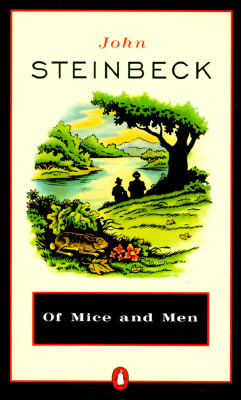 No wonder this author is so highly regarded by so many. He can make a short story, alright, a novella,  into an epic tale, one that will never leave you.

This book is so full of everything, it touches so many subjects, it's amazing. Of course, as in all his works I have read so far, the story takes place during the Great Depression, this time he talks about migrant workers. In just a few pages, he pictures the life they lead and you are right in the story. You can take this story as an example for so many bad parts of society, prejudice, racism, the poor and ugly side of the world and people dreaming of a better one.

Steinbeck is the best author to explain what has gone wrong with the American dream, he describes the downside of it, the people who don't fit in, even if they try hard. His phenomenal writings cast a shadow into the next century. Nobody describes people and situations better than he did. Nobody draws an image of society as well as he did.

"Of Mice and Men" is certainly one of the gems of world literature that should be read by everyone. You know what is going to happen but you desperately don't want it to happen. Simply beautiful writing.

From the back cover: "The tragic story of the complex bond between two migrant laborers in Central California. They are George Milton and Lennie Small, itinerant ranch hands who dream of one day owning a small farm. George acts as a father figure to Lennie, who is a very large, simple-minded man, calming him and helping to rein in his immense physical strength."

Also read "The Grapes of Wrath" and "East of Eden", they are phenomenal.

John Steinbeck received the Nobel Prize for Literature in 1962 "for his realistic and imaginative writings, combining as they do sympathetic humour and keen social perception".

I contribute to this page: Read the Nobels and you can find all my blogs about Nobel Prize winning authors and their books here.
Posted by Marianne at 13:26