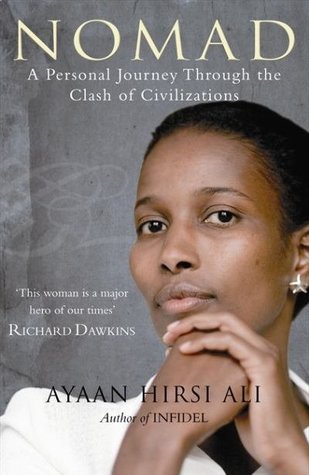 Hirsi Ali, Ayaan "Nomad: From Islam to America: A Personal Journey Through the Clash of Civilizations" - 2010

After having read "Infidel. My Life" in December 2009, we couldn't wait for the next book about Ayaan Hirsi Ali's life. We thought, she was an intelligent and courageous woman. One of our members said, everyone who has something to do with Islam should read this and she would like to read another book that brings this in balance. Any suggestions?

The author writes in a clear way, some thought, her life in Somalia was the most interesting part, the different views and culture. We were all glad to have read this.

We were surprised that she says Christians should convert Muslims even though she is an atheist. For her, the God of Christianity is preferred to the God of Islam (even though we do talk about the same God here). In her regard, Islam is only black and white. It was interesting to see the problems she addressed that a lot of refugees have when coming to Europe. She says, if you don't accept the views here, don't come. There is one thing, the people in the Western world don't want, that is to be called racist or intolerant. Ayaan Hirsi Ali says by giving in we enable the refugees to carry on what they turned away from in the first place. We have to get over this. A US American member said, their whole country is built up with immigrants.

We addressed some of the problems that occur in the various countries, compared a little from what we knew, all in all, we had a very interesting discussion and surely will want to read more about this.

Also read Ian Buruma "Murder in Amsterdam: The Death of Theo Van Gogh and the Limits of Tolerance".

We discussed this in our book club in May 2011.

From the back cover:
"Ayaan Hirsi Ali's gutsy memoir INFIDEL which exposed Islam's hypocrisy about the status of women caused a worldwide sensation. In it she spoke out about her own experiences as a good Somali Muslim woman, forced to submit to outmoded rules, and often reduced to an invisible silent presence. But there is a price to pay for speaking out - and in this highly personal follow up, Ayaan examines the high cost of freedom - estrangement from her family and country, the loud criticism of her by many Muslims (some of them women), the 24-hour security which came as a result of death threats, and her struggle to come to terms with an often lonely independence. She records the painful reconciliation with her beloved father who had disowned her when she began criticising Islam and the sorts of conflicts inherent in feeling torn between heart and mind. And as she delves into Islam's obsessions with virginity and the code of honour, she asks the question on everyone's mind: why do so many women embrace a religion which shuns them? Weaving together memoir and reportage, Ayaan confronts the complacency and ignorance that often color intellectual debate on Islam. With disarming honesty, she shares her experiences, doubts and insights. This book is the natural follow up to INFIDEL."
Posted by Marianne at 17:03