Storm, Theodor "The Rider on the White Horse" and other tales 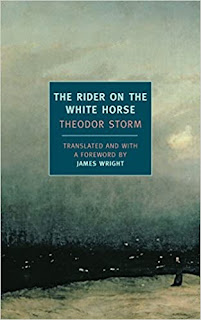 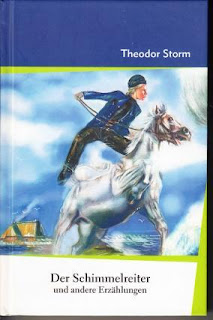 "The Rider on the White Horse" is well-known in Germany. Most people have heard of Hauke Haien, even if they haven't read the story or seen a play or a film with him.

There are not many Gothic novels from Germany and Theodor Storm was not exaclyt in the right time-frame and you can also classify the story as a legend but I think this might be one of the most successful books of the Gothic genre in the German language.

One of my favourite German authors, Thomas Mann, called it a "tremendous tale, with which Storm took his conception of the novella, as epic sister of drama, to unprecedented heights".

I read my first book by him in school (Pole Poppenspäler/Paul the Puppeteer) and that was more the classic German realism genre than these novellas here. I loved that story and Husum, Storm's hometown, the "grey town beside the sea", that still shows much of his life.

For some reason, I never read any of the novellas in this collection. I should have done a long, long time ago.

With his way of telling a story, Theodor Storm manages to create suspension in a unique way. You can't wait to turn the page to see what's going on next. Like many other books from this time, life by the sea was a constant battle with the forces of nature. And people were very superstitious, they used to believe in many old wives' tales as well as the Christian church. Bringing all these subjects together is probably one of the secrets behind this masterpiece.

But we don't just learn about nature in the 19th century, we also learn about the people who lived back then and how they coped with life. A good story.

"The Rider on the White Horse begins as a ghost story. A traveler along the coast of the North Sea is caught in dangerously rough weather. Offshore he glimpses a spectral rider rising and plunging in the wind and rain. Taking shelter at an inn, the traveler mentions the apparition, and the local schoolmaster volunteers a story.

The story is both simple and subtle, and its peculiar power is to surprise us slowly. It is a story of determination, of a young man, Hauke Haien, living in a remote community (Storm depicts the village with the luminous precision of a Vermeer), who is out to make a name for himself and to remake his world. It is a story of devotion and disappointment, of pettiness and superstition, of spiritual pride and ultimate desolation, and of the beauty and indifference of the natural world. It is a story that opens up in the end to uncover the foundation of savagery on which human society rests.

Theodor Storm’s great novella, which will remind readers of the work of Thomas Hardy, is one of the supreme masterpieces of German literature."


The edition I read offers three more novellas. They have all been published separately in German but I couldn't find them as an English translation. They are probably in one of the collections you can find or on Project Gutenberg which I can't look into because it is blocked in Germany.

I have found a few of his stories here to read online: Angel Classics.
And some more on the English page about Theodor Storm and his works here.

Reading the title, I have a melody in my head since it is the title of a German folk song or ballad. Like in the story, there are two young people who love each other but who can't get together.

If you would like to listen to the song, there are a few variations on YouTube, one of the nicest ones is here.

Description:
"Title of one of the folk-songs often sung by the music students in the story.  It relates the love affair of the student, Marx, which ends in his death."

I had never heard of this story before but I really like it. Rather than fighting nature, the protagonist has to fight society. He is poor, his wife dies, his son goes to America to earn a living and disappears, there is nothing that doesn't overcome cooper Basch. But he soldiers on and there is a happy end.

Description:
"When the old sister of the cooper Daniel Basch goes into the poorhouse, he has the means to marry Line, the Harbour Master's daughter. She dies in childbirth, however, when their son Fritz is just six years old. Liked by all, the boy becomes a competent workman, and goes to America leaving his pet bullfinch with his father. A false report of his death and the theft of the bullfinch cause Daniel to attempt to drown himself but is eventually saved. Nearly dying of pneumonia, however, he is saved by the return of Fritz and the bullfinch. Fritz takes over the business and marries Magdalene, the daughter of his old teacher."

Another gripping story that starts completely different than you think it will go on. And you only understand the title towards the end. Like in his other novellas, there seem to be two stories. A present and a past one, both not uninteresting but the past one is the more intriguing one.

I don't know how well he is translated but the original is beautiful.

Description:
"The narrator meets a head forester in an inn near Jena and is invited to stay with him and meet his wife, Christine, who is also a North German.  It turns out that they come from the same town. As a child she was adopted by a clerical couple whose son is now her husband. The narrator is told by the forester that Christine's father was a man known as 'John Glückstadt' from the name of the prison where, as a very young man, he had served a five-year sentence for a robbery perpetrated out of mere bravado. He then realises why Christine thinks her father must have had a 'double', for she has a nebulous recollection of a violent man who ill-treated her mother, though her conscious memory of John Hansen is of a particularly loving father. John married Hanna, but in spite of his love for her and their child, the scorn of all for the jailbird, and his inability to earn more than a pittance because of this, so disturbed him that he took to beating his wife. One day he hit her and in falling she knocked her head against the stove and died. John never again gave way to anger, but centred his life on Christine and made her happy, although they were often near to starvation. He met his death on a pitch-black night by falling into a deep well, around which the tale revolves."