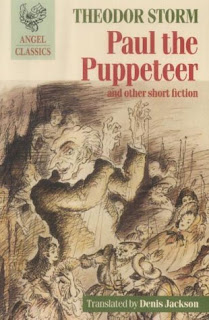 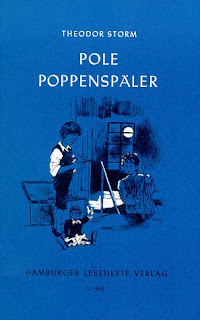 A novella by a famous German author known as one of the most important figures of German realism.
He has been compared to Thomas Hardy. I think the comparison isn't bad. Theodor Storm is certainly worth having a look at.

In this story, he tells us about a guy called Paul (Low German Pole) who is a puppeteer (you guessed it, Poppenspäler in Low German).

Of course, this was a novella we had to read in school. I enjoyed it tremendously and even after all these years, it's still vividly in my mind. Still, when I came upon my old copy when moving, I decided to read it again.

And there is no change. The book is still as good as it was when I first read it. We learn about the changing of the world, how the marionette theatre vanishes from everyday life, like so many other things that disappeared with the coming of the television. But we also hear about the life of those travelling and bringing joy to the people.

The author was born in Husum, a lovely city on the North Sea where you can still visit his house. He called it "The Grey Town by the Sea". But it's not at all grey, it has some lovely (mainly red brick) buildings and being located at the sea makes it even more attractive.

As an English translation, I only found a collection with two other books, "The Village on the Moor" and "Renate" which I haven't read. Maybe some day when I happen to find them.

"Pole Poppenspäler is the nickname given to the cabinet-maker Paul Paulsen, because of his childhood enthusiasm for Herr Tendler's travelling puppet theatre and his friendship with the latter's daughter, Lisei. In later life Paul comes across Lisei in great distress while he is working as a journeyman in a town in central Germany; her father has been imprisoned on a false accusation of theft. Paul's local influence succeeds in freeing Herr Tendler and shortly afterwards he marries Lisei, taking both her and her father to his north German home, Husum. Herr Tendler is able to help Paul in his workshop for he is a wood-carver of great skill, as demonstrated by his former creation of the puppet 'Kasperle' which plays a leading part throughout the tale. His desire, however, to continue to produce puppet plays is strong, but his first attempt in the town hall is ruined by rowdy local youths. He retires deeply hurt and dies a saddened man shortly thereafter."