Obama, Barack "Of Thee I Sing" 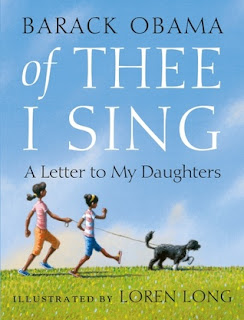 This is one of the cutest picture books I have seen. Every page adds a new example of a person who is an ideal for as all. There is Martin Luther King jr., Albert Einstein, Abraham Lincoln, but also Helen Keller, Billie Holiday and many, many fabulous people who do their bit in order to make this world a better one.

Barack Obama wrote this for his daughters when they were little. It shows how much he loves not just his own children but people in general. He shows the compassionate president he would become (the book was written before he was elected). The world needs more people like him and those he quotes in this book.

The illustrations are also wonderful. On the first page you see Malia and Sasha with their Portuguese water dog, Bo, then, on every page they add another character who is the famous person he introduces as a child, they are smart, creative and inspriring, part of a family, never give up … And they then join in the group of children who watch the next person. Beautiful.

Loren Long, the illustrator, has also written some books of his own and they are just as beautifully illustrated as this one.

I think this is a great book, especially if you have young children and want to guide them on the right path. You can tell from the family Obama how important love is and how it can be given and what it does to the children.

It shows the kids how one person can change the world if they just pursue their ideas.

Definitely one of my favourite books of the year.

"In this tender, beautiful letter to his daughters, former President Barack Obama has written a moving tribute to thirteen groundbreaking Americans and the ideals that have shaped his nation. From the artistry of Georgia O'Keeffe, to the courage of Jackie Robinson, to the patriotism of George Washington, Barack Obama sees the traits of these heroes within his own children and within all children.

Evocative illustrations by the award-winning artist Loren Long at once capture the personalities and achievements of these great Americans, and the innocence and promise of childhood.

This book celebrates the potential within all of us to pursue our dreams and forge our own paths."