What a funny challenge. Jana gave us the hint to look up Crayola colours. My sons were never much into drawing, so we only had the basics. But wow, they have any mixture of any colours on earth. Unbelievable.

It was a tough decision, would I stick to the known colours or rather use those funny ones. In the end I went with blue and green, my favourite colours. I would have loved to come up with a title like "Periwinkle" or "Wild Blue Yonder". I'm sure there are books with those words in their title.

You see the colours here in the order of my book list. Arent' they beautiful?

And here are the books: 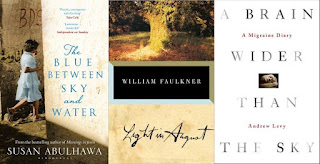 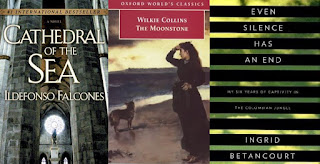 Betancourt, Íngrid "Even Silence has an End: My Six Years in the Jungle"
(French: Même le silence a une fin) - 2010

Abulhawa, Susan "The Blue Between Sky and Water" - 2015
There are even two colours in this title. Blue and Sky.
Having said that, there might even be a "water blue".